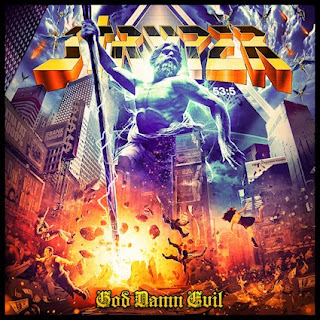 In the 80s and 90s, it was almost embarrassing (just for me) to say that I liked Stryper. Almost anyone I knew in my field of friends hated them. When it used to come up in conversations, I would be slated for listening to ‘wimpy, poodle perm, Jesus loving, rock!’ Harsh words indeed. (And that was from my mum!). Way back then, and to this day I gave never faltered with my love of this band. OK, so not all of the albums have been brilliant, as I sort of lost interest with the early noughties output. I still own everything, but wasn’t exactly over enamoured with the output. But then, in 2011 began the comeback, they eased their way back in with a covers album, and an album of rerecorded Stryper classics. This saw Stryper entering a golden period that I honestly didn’t see coming. Call it the second coming (What do you mean they’ve done it? Bollox!). 'No More Hell To Pay', rocked me to the core. It was full on metal and a great way to resurrect their career. Not that they ever went away of course. Soppy ballads were replaced with hard-edged rockers, and they sounded better than ever.

We jump to 2018 and this is their 10th studio album, 'God Damn Evil'. Since 2015s 'Fallen', Tim Gains has left which is a crying shame for me, but I wish him luck and success. In comes Perry Richardson (Firehouse) as a full time member.

Opening song ‘Take It To The Cross’ completely took me by surprise. I didn’t think they had it in them. A proper old school thrash riff, with complimenting thrash-tastic chorus, complete with death growls, courtesy of Matt Bachand (Shadows Fall, Act Of Defiance). I love it when a band regenerates and keeps you guessing. What would be the fun in just trying to write in the style of ‘Soldiers Under Command’?

‘Sorry’ and ‘Lost’ are more in line with what would be their ‘sound’ to be these past few albums, edgier, heavier, but with all the harmonics that you love them for, but for ‘Lost’ you have MS hitting notes he hit in his twenties. It seems as if a certain Mr Sweet is able to poop riffs and lyrics for fun. Title track ‘God Damn Evil’ is so planted in the 80s, I think it was brought into the studio as a demo on cassette in a 1983 Camaro! Its one of Stryper’s best anthems…..to date.  Its sing-a-long-a-metal at its finest. 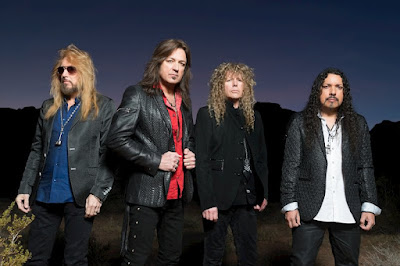 ‘Robert….Robert, we are over here mate! I told you not to wear your bleedin’ sunglasses at night. It’s as black as Hell!!!’

‘You Don’t Even Know’ has a doubly layer of Sweets vocals, with a nice throaty wail for the chorus. ‘The Valley’ kicks off with a short passage from the 23rd Psalm, and continues in that vein throughout. ‘Beautiful’ is a definite grower, the chorus being the hook here. ‘Can’t Live Without Your Love’ is the nearest thing to a ballad, thankfully its not one in the style of the saccharin coated ones from the 80s and builds nicely to its climax. Closer 'The Devil Doesn’t Live Here’ is the fast paced rocker on show here, and reminds me a bit of Tooth & Nail era Dokken.

First song aside, which could divide some Stryper fans (not me) it’s a very strong album from the get go. Where lots of bands are plodding along with ‘average’ albums, Stryper are relevant, and pushing forward with every release. Few bands from the 80s are doing this, and Stryper are rightly proud of their output and position as one of rocks finest.

MS has recently gone on record stating that he feels that this is their best album, do you know what, he’s not far wrong. I still love all the classics from the 80s, but his writing, and the consistency of his writing have improved with age.