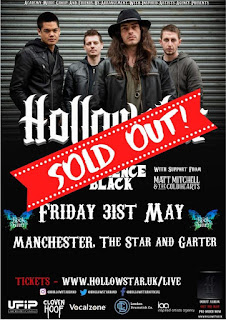 As what seemed like the whole of the World descending on Manchester for the first of a run of nights for The Spice Girls at the Etihad, just around the corner a small band of real music aficionados chose to be at The Star & Garter for a night of what would be one to remember.


The venue was small, and bijou at best, and possibly (some) blood, definitely sweat, and some tears would be shed here this evening. More on the tears later... 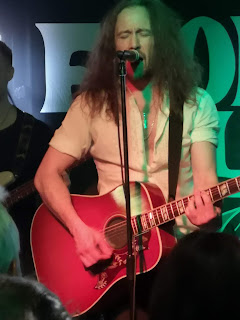 The guys in attendance know a class act when they see one, as the upstairs room was almost full for Matt Mitchell & The Coldhearts. Matt (ex-Pride/Furyon/Colour of Noise) is the most experienced man on the bill, but sometimes you just have to start anew, dust yourself off and get on with it. His album dropped today and MM&TC came out fighting. The album is good, but the select songs chosen stand up a lot better played live as they are performed with a bit of added welly. Mitchell looks and sounds the part, and has surrounded himself with quality musicians. It was a case of hit ‘em hard with what little time you’ve got...’On and On’ is a good pacey opener, but ‘Black Diamonds’ gets the crowd bouncing (Literally, thanks to the floor in the venue!). Matt wails ‘I hope you find what you’re looking for’ and he is spot on. We did. ‘Kings & Queens’ is a summer song that should be on repeat on the radio, and ‘Unavailable’ showcases the heavier side of Mitchell. It was the fantastic ‘Home’, which did it for me, a number that showcases his and The Coldhearts talents and is his shining moment. It’s all over too soon with ‘Wave Goodbye’. Apt, and a great start. Form is temporary, class is permanent. 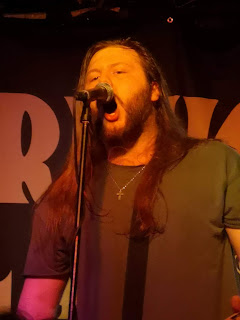 Where MM&TC was a composed and very good performance, Florence Black essentially ripped up the rulebook and are one of those bands that don’t care who precedes or follows. A three piece from South Wales they opened up with the Budgie classic ‘Breadfan’ and practically beat the audience into submission and levelled the Star & Garter. When the person next to you (Roger) leans into you and says ‘that was worth the admission alone’ you know you are onto something special. Me, I just had two words written down...’bloody awesome’. Its one of the best covers of any band I’ve ever heard, its that good. Like a Tasmanian Devil that’s been provoked with a pointy stick, Florence Black were taking no prisoners – ‘Fiesta’ is a pounding track that leaves you breathless, and in frontman and guitarist Tristan Thomas gives his lot, especially sweat. In fact, in Thomas, Perry Davies and Jordan Evans it’s like being in a 3-2-1 fight, the punches just keep coming and there’s nothing you can do about it. ‘Same Again’ is a song built on the foundations of Budgie and grunge and is a belting force of nature. ‘Gunshot’ originally features Benji Webbe of Skindred, and if anything for me is the weaker song of the set. A mix of Skindred and Disturbed, it doesn’t fit FB as much as the rest, and their own songs prove they don’t need endorsements or outside assistance. Finally its onto ‘Smoke’ and Florence Black finish as they started, with a wallop, and its a pleasure and delight to see these guys rip the place up. I think that had they reversed the set, and left ‘Breadfan’ until last, I think I’d have wet myself! 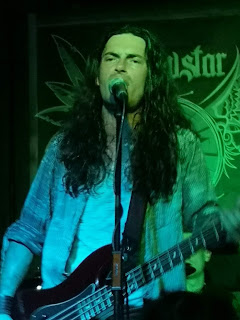 Where FB had raw power, force and energy, Hollowstar are riding the coattails on the back of a very good debut album with some belting songs. Coming on to a strange, but nice intro in Massive Attacks ‘Teardrop’, before launching into album opener ‘Take It All’ and a twin guitar attack of Haines and Collett, Joe Bonson is the focal point and rightly so, with charm and substance and a voice to match. With Hollowstar is more about groove and feel, and ‘Down By The Water’ ‘Lay Down’ and ‘Guilty’ are as groove-laden as they come. ‘Invincible’ highlights the intensity of Hollowstar and is almost ‘Cult-like’ (The band). ‘Think Of Me’ is my fave track from the album and is even more Alter Bridge/Bad Company live and has a very infectious chorus. This was dedicated to Chris, who gave Jon a job booking gigs for Hollowstar who passed away before the Album was done. ‘Money’ was...er...bang on the money. ‘New Age Lullaby’ and ‘Feel The Burn’ show the bands roots, and their sharp progression over the last couple of years. 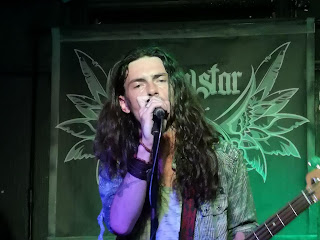 There are a couple of heartfelt tributes to a pair of Hollowstar soldiers who have fallen along the way and deserve their mention. Chris, who gave Jon a employment to essentially book his own gigs for Hollowstar and is given ‘Think Of Me’ and the lads friend Carl who lost his fight to depression last year, in ‘Good Man Gone’, a rousing tribute. Both gents were given a rightful round of applause and at both points I had something in my eye. (As did others I expect.


Free’s ‘Wishing Well’ is up next and a staple of the Hollowstar set. Its more Moore (Gary) than Free’s version, and breaks their set up well for the final furlong. ‘Overrated’ is definitely not what Hollowstar are judging from tonight’s performance. The set is over all too quickly with ‘All I Gotta Say’ and was released a good year ago and whetted the appetite for the debut, and is a great song to finish the set. Its easy for bands to play a whole set of an album, but Hollowstar have a core of songs from this and their EP that will be a staple of sets hopefully for years to come. I sincerely hope all 3 bands tonight are here for the long run.


It was one of those nights that I’ll remember for quite some time. Catch them still while you can for one of the best and intimate gigs of 2019. And it wasn’t at The Etihad.

P.S. either the PA at the venue is shite, or the sound engineer was wearing mittens, or was a deaf as a post! All 3 vocalists sounded as if they were singing underwater at times. But rock is mainly about attitude, and thankfully the 3 bands had this in abundance. That aside, it was still a cracking gig, but could have been so much more, had the sound be decent.


Down By The Water


All I Gotta Say