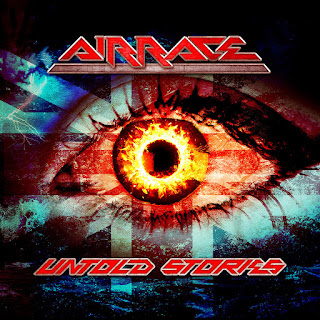 Airrace are one of those bands that so could have easily passed you by in the 1980’s. For me it was pure chance. A lad who I worked with was a fellow young rock fan and showed no signs of liking AOR, melodic rock and anything with a parpy keyboard. Until one day he came in with a cassette for me to listen to. It was ‘Shaft Of Light’. He raved, I said I’d listen. Well, it was free music. I loved it! I still do. Its up there, almost, with Indiscreet and Native Sons, its that good. However it was short lived, and their star ascended and then imploded in a very short time as Airrace were done by the summer of ’85. Their second album, which came a mere 27 yrs after the debut was also well worth the wait. (review here -  https://www.chesyrockreviews.com/2011/07/airrace-back-to-start.html) Murrell was still in position and sounded as great as he did all that time ago.

The undoubted gem here is Adam Payne. The songs here are fantastic, but I did not expect this level from him, he has certainly upped his game, and Mansworth has cajoled a performance out of him that will undoubtedly bring him greater recognition. For now he is Mansworths and Airrace’s and lets just enjoy that. As a quick comparison – with Serpentine he sounded like Gary Hughes, and now with Airrace, he sounds more like Adam Lambert! That’s some vocal change. I shit you not!

So what do we have? Well, if you are already acquainted with Airrace then it’s a complete no brainer. If you are new to these guys then you are in for one of the AOR treats of 2018, if not THE treat of 2018. Opening track ‘Running Out Of Time’ has a beat and pulse that just hits you full in the face (and ears).  Its grandiose and Queen by any other name, and it’s a great way to introduce yourself, Mr Payne. It is one of the best tracks you’ll hear this year. ‘Innocent’ gain harks back to a time when this would have sold by the millions, and Kelsey Foster’s keys are literally ‘the key’ to ‘Innocent’. 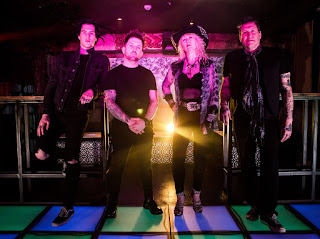 ‘Eyes Like Ice’ sounds like it’s the opening salvo to a Marvel movie (Wonder Woman) – it could easily grace a movie, such is its composition, with its big sounding chorus and cracking riff. On ‘Different But The Same’ Airrace and Payne in particular channels his inner Robert Plant for a very Zeppelin-esque heavy blues, stomping number, and is accompanied by some great organ playing (oo-er). If ‘Different..’ was Zep, then ‘New Skin’ has Deep Purple running through its veins with its Jorn Lord and Blackmore influence. An album wouldn’t be a melodic rock album without a ballad, and here on ‘Lost’ its maxed out with some fantastic layered harmonies that sets this ballad apart from the pack. Its ELO melded with REO and is something else. Its so smooth, you could use it for a chocolate advert. Marvellous!

‘Love Is Love’ IS Supertramp with a bit of Foreigner thrown in with its snappy and crunchy beat. ‘Men From The Boys’ has a nice big dirty riff, but someone with a voice as high as Payne, doesn’t quite carry off the sentiment.  “Summer Rain’ is pure unabashed pop, and is a summer track to be sure and could easily be picked up by Radio 2! ‘Come With Us’ is back on track and is all riff, and is straight out  rock n roll at its finest. ‘Untold Stories’ is over all too soon with ‘Here It Comes’, yet another feel good song that shows of Payne’s vocals.

What’s on offer here isn’t new, based on all the little influences, but all the songs are of a very high quality and have been written and performed better than most will muster in 2018 or any other year.

If I rock up at Wolverhampton and Payne hasn’t got a blue badge in the van I’d be surprised, as this dude has traded his left bollock to sound this good.

'Untold Stories' wears its heart on its 70s velvet sequined sleeve and its legs in their 80s legwarmers. It's in my Top 3 of the year so far, and something will have to be bloody great to move this out.

I hope they can keep this line up together, as its pure gold. They deserve another album out of Frontiers, hopefully in a couple of years and not the long wait we have had so far. If it all finished tomorrow, its one hell of a way to bow out. Lets hope not.

September Tour – with The Treatment and