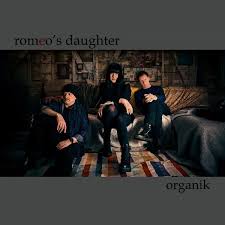 My good self and Romeo’s Daughter go back a long way. Quite a long way in fact. All the way back to October 26th 1989, Liverpool Royal Court, when they supported FM on the ‘Tough It Out’ Tour. We went for FM, and we still do, but we were taken aback by the then unknown to us Romeo’s Daughter. Our lives have been entwined with their music ever since. The following summer we were getting married, and were looking to come to a compromise on a wedding dance song. We decided on ‘Hymn’. Not a popular choice I suspect with many for a wedding song, but it was one we both loved. We were even more surprised when our wedding DJ had the album in his collection! To compound the link, even our daughters (Rachel) middle name is Leigh. To make it look like we knew what we were doing, Harry's middle name, George, we told him he was named after George Lynch, to make up the fact they were both partly named after rock stars.

Anyway, enough of the gushing, onto the EP. The guys have just released an acoustic EP (called ‘Organik’) of some of their favourite songs, and a new one thrown in for good measure. Acoustic covers can be a bit bland and uninspired, but they can can also be a true test of the strength of a song. Not all songs could be played acoustically, and thankfully the ones chosen for the EP are good ones.

I have to say that as a fan of Leigh Matty's breathy and sultry vocals, the acoustic versions suit her voice perfectly. They are delivered with passion and warmth. It’s weighted heavily toward the last two studio albums, ‘Enemy’ is achingly beautiful, and benefits from the intimacy of an acoustic guitar. ‘Radio', a light and poppy number originally, is now stripped back and is still effective as the original. ‘I Cry Myself To Sleep’ (the song that mentions their name) was already a passionate number, and is now delivered with more emotion. ‘Alive’ is given a new ‘life’ in this version and is focused around Matty’s voice. The new song ‘Since You Went Away’ is typical of the last couple of albums, with poignant and wistful lyrics delivered with love. ‘Talking Love’ was destined to be covered acoustically, and the delivery suits a lower register.

Nothing here is forced, the songs suit a stripped back sound and leave you wanting more.

I’d like to see a set of two halves in the future, one acoustic to open, followed by the full fat version. Romeo’s Daughter (and Leigh) never sounded better. Its a mature EP that fits them like a well worn pair of comfy slippers. Twelve months ago it could have been curtains for them, but thankfully Craig Joiner is thankfully still with us, and hopefully for years to come and delivering little gems like this.