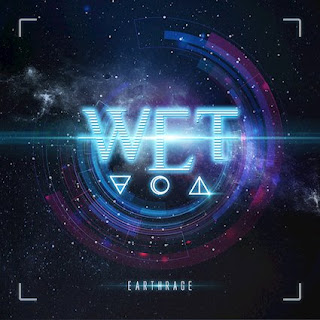 When I was lucky enough to be asked if interested in writing a music review my reply was "Yep, just set the expectations low and you'll not be too disappointed, oh what artist/album are we considering?

For any non-Melodic Rock fans, W.E.T are a melodic rock fan's wet (pun intended) dream of a super group. The name W.E.T comes from the bands the members play in: Work of Art, Eclipse and Talisman (see what they did there?)

I've got the previous W.E.T. albums namely “W.E.T”. and “Rise Up” seen them play at Firefest as well as seeing JSS and Eclipse in their own right. They've never disappointed.

Anyway, forget the past, let's consider the future, how have the years affected their chemistry? Can they still deliver? You better believe they can. ‘Earthrage’ is a stunning album of melodic rock with the obligatory riffs, solos and soaring vocals.

The opening track ‘Watch the Fire’ kicks off with a gentle kind of menacing riff that grows with the guitars kicking in and ramping up the intensity. Erik's vocals come in setting the tone and then JSS kicks in with his distinctive and powerful voice and the song then takes off. WOW, just WOW!!

A band that has the strength of 2 powerful vocalists supported by musicians at their best is something special. I'm not going to appraise every single song in detail but take it as read there isn't a weak track.

There is definitely a massive Eclipse influence on the songs (obviously as Mårtensson produced, recorded and mixed the album) and when coupled with the Jeff Scott Soto lead vocals and the Sall keyboards it takes on a character of its own.

‘Kings of the Thunder Road’ is a perfect example, the Soto ability to take a song, raise the stakes and hit the notes is something magical. He does it time and again. Take a clichéd song title and then blow it to pieces. Driving guitars with the Soto voice, supported by the layered backing vocals is a winner. For me it’s a song that would grace a Rocky film with Soto singing and marching up the road as the supporting cast fall in behind his massively powerful voice and then the guitars step up beside to him to blast out a solo and then they all fall in step to the chorus. Amazing stuff.

Don't get me wrong, whilst ‘Earthrage’ is Eclipse influenced, it is not an Eclipse album, the combined talents ensure that this is a W.E.T album through and through.

‘Elegantly Wasted’ is a superb 3 minute piece of angst. The lines "I meet your tantrums with a smile, won't lose my cool or lose my style" followed by "another glass of wine and I'll be fine" resonated with my wife. "Has he met me?" she asked. Obviously not because whilst she’s been wasted it’s never been elegantly.

‘Urgent’ ups the tempo as does ‘Dangerous’. ‘Calling Out Your Name’ starts slowly but it builds and as we in Glasgow would say, the chorus is a belter. A word of advice, if you work in a quiet office then don’t play this in your headphones when pretending to be working, one of my colleagues thought I was having a stroke.

As you would expect and hope there are the slower songs and for me ‘Heart is on the Line’ is simply beautiful. Yes, beautiful. Oh take the piss, I don't care, I'm old, big and ugly enough to take it.

It is a heartfelt ballad and the softer side of JSS showing off his vocal skills without getting twee or even worse, X-Factor winner like. The killer guitar solo to back it up and the backing vocals scream out that this would, God forbid, be a radio friendly hit.

‘The Burning Pain of Love’ isn't as I first feared a song about an STD or a urinary infection. Instead it's a classic mix of guitar and keyboards with a haunting layered vocal chorus. It leads into the final track that doesn't exactly slip off the tongue – ‘The Never-Ending Retraceable Dream’. A stunning finish to the album.

Quality from start to finish, top song writing and delivery, catchier than a dose and surely there must be live shows planned because this is simply too good to listen to without a few hundred other like-minded fans.

In conclusion, welcome back W.E.T, I've missed you. I listened to Earthrage the first time in nervous anticipation just in case the hype and expectation would end up in disappointment. Shame on me for ever doubting.

I doubt I'll hear better this year but the gauntlet has been thrown down. I'll be right here waiting as Richard Marx sang.

1. Watch The Fire
2. Burn
3. Kings On Thunder Road
4. Elegantly Wasted
5. Urgent
6. Dangerous
7. Calling Out Your Name
8. Heart Is On The Line
9. I Don’t Wanna Play That Game
10. The Burning Pain Of Love
11. The Neverending Retraceable Dream