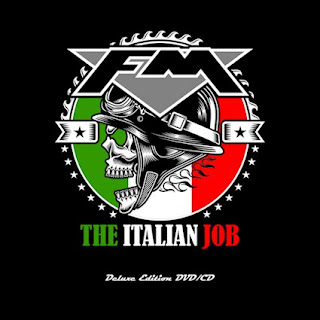 If you’re here and have never heard of FM before, then where have you been since 1986? After 10 studio albums comes this – The Italian Job, a play on words to mark their appearance at Frontiers Festival in Milan last year. The only thing that could have made this even better for the DVD release is Stiv and the gang pulling up to the venue in 3 mini’s (red, white and blue of course) and coming onto the stage whilst Quincy Jones’ ‘Self Preservation Society’ song is playing. That would have been an entrance and a half. Anyway they didn’t, so its onto the show…..for your delectation and delight, I am only reviewing the audio version!

If you’re already a bit of an FM like me, what you get are 16 peerless songs of utter high quality, and I’m almost fed up of saying this, but when you have a vocalist of Steve Overland’s quality anything and everything is possible. It’s not just about Steve-o. In Merv and Pete you have a rhythm section that ticks like an atomic clock, its never out of sync and is the backbone of FM. Add Jim Kirkpatrick, who is the longest serving and best guitarist FM have had, and the keytar prowess of Jem ‘wadda mean four keyboards are enough?’ Davis, and you have one of the finest British exports since Spam was invented.

The set is almost perfection. I say almost as there’s a couple of gems from the Andy Barnett era that are missing, notably ‘Blood and Gasoline’, but that said, its about as good as its gonna get.  New songs like the Van Halen-esque ‘Life Is A Highway’, and the Bad Co. like Black Magic’, and the pop-tastic ‘Killed By Love’ interweave with the ‘classics’ really well. A lot of bands newer output is patchy, but not FM, as these sit alongside oldies without any need to feel like they are  there under false pretenses.

Standard staples such as ‘I Belong To The Night’, ‘Someday’, ‘Love Lies Dying’, That Girl’ and ‘Other Side Of Midnight’ cover the early era and just cannot be missed out. I’m glad to see the excellent and underrated ‘Tough It Out’ getting an outing. One of the newer songs that is a staple and rightly so is ‘Story Of My Life’. Had a certain Mr Bolton sang it, it would be a million seller, and it should be with Steve Overland vocals. I’ve seen grown men sob into their pints seeing this live, and it is a perfect ballad.

It’s not nearly a review, more of an observation in majestic musicianship, tight as a nut songs with one of the best singers the UK has ever produced and harmonies to die for. I prefer to see it, rather than hear it, so my money is on watching the DVD.

My only issue, FMs set now needs to be like Rush at 2 sets, lasting approx 3 hours. There’s just too many great songs not making the cut. That said, almost every gig could be almost very different, there’s that much quality to play live.

This Runaway Train shows no signs of stopping.