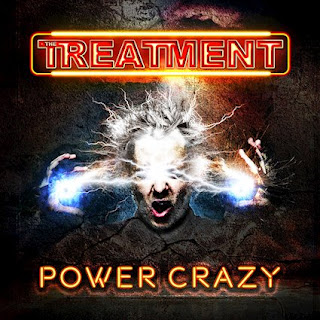 I was a fan back in the early days of this band, seeing them supporting (and demolish) their headline act at the time who was Thin Lizzy. For some strange reason I parted ways with them not long after their second album, only to come around full circle again after seeing them in Rebellion last year with Dhani Mansworth’s dads band, Airrace in support (emphasis on ‘ace!’). The catalyst for this change was down to (recent) new vocalist Tom Rampton. He had more style and swagger, was a pretty good front man, and most importantly, the bloke could sing. Here we are, at album number four, ‘Power Crazy’ and I wanted to see if the live show energy is represented and transferred onto an album…

The guys have taken the basic ingredients of bands such as AC/DC, Rose Tattoo, Accept and Krokus, (if you’re in the 30 and under age group you may need to ask your dad about Krokus, Rose Tattoo and Accept), and mix simple but splintering riffs, with more than a splash of melody – and opening track ‘Let’s Get Dirty’ is a prime example of this recipe. Its instantly headbang-able, and worm planted in your lug’oles for instant repeat and gratification. ‘Rising Power’ is similarly based, but with a bit more speed and tempo. ’On The Money’ is bluesier, and could be a ZZ Top song in any other life. With a song like ‘Bite Back’ you don’t need to delve into your thesaurus to get to know that the song is going to have punch, and er…..bite! The immediate impact that Rampton has given The Treatment is hard to deny, as rasp and pitch to his vocals that make a match made in heaven. He is even elevating what could be an average song for anyone else, but in their hands, as song like ‘Luck Of The Draw’ rises like cream.

‘Hang Them High’ (watch the video above, its proper old skool), shows the lads taking on the best and winning. Fast, frenetic, dirty - it ticks a lot of boxes – and AC/DC could only dream of a song like this at their age! ‘Scar With Her Name’ riff reminds me a bit of Andy Taylors ‘I Might Lie’, but I’m probably writing shite as usual. ‘King Of the City’ should be on the next GTA -  its just me kind of music to run someone over in! ‘Waiting For The Call’ takes a step back, and goes for the slower, but non-less effective approach. ‘Laying It Down’ is full on in yer face, and expect it to be a live addition. ’The Fighting Song’ encapsulates all that is good about The Treatment; bluesy, hard and gritty. Closer ‘Falling Down’ is in more of a classic rock style if Quo and Rainbow got together for a session. The album also has a bonus of an acoustic version of  ‘Bite Back’. The vocals are pretty much the same as the fully powered 240V version, when I was expecting a little more subtlety. The album cover courtesy of Tristan Greatrex is also really nice and the design fits in well with the raw power and energy of the songs on offer here. It looks good, it sounds fantastic and should be on your beg, steal or borrow list! Or just buy the bugger!

The Treatment have laid their collective hearts on the line to bring you ‘Power Crazy’. It’s the best I’ve heard them sound. They have always been very good, but its now their time to shine.

It’s not difficult to emulate bands like AC/DC, but very few bands can do it as well as them. The Treatment have the craft, age, and experience on their side. If you think this is good, well, they are only just hitting their stride….

Should AC/DC do a final flurry of a tour, I can think of no better band to support them (and to push and cajole a performance out of them).

The Treatment? Its just what the Doctor ordered!