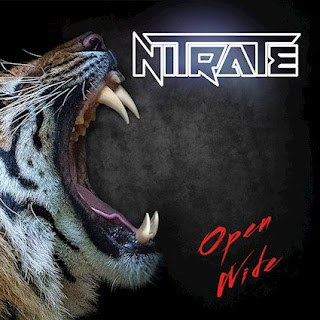 If your idea of a  ‘who’s who’ of a band made up of members with extensive CVs (not because they cant hold a job, the opposite, because they are so much in demand) then look no further than Nitrate. If you think that the music on offer gives a nice warm comforting feel, that’s because main guy Nick Hogg , bass and keys co-wrote the songs with Robb Wylde (Teenage Casket Company / Midnite City / Tigertailz / Vega). Robb is also providing rhythm guitar on Open Wide. Also present are Mike Newdeck  - drums  & mixing (Midnite City / Edens Curse / Blood Red Saints / Newman), Marcus Thurston - guitar (Vega), vocals from Philip Lindstrand (Find Me / east Temple Avenue / Strong), and mastering from Harry Hess (Harem Scarem). Fuck, just to make sure, Nick Hogg got the other three-fifths of Vega (Martin Bros and Wilson) to chip in with one song (Bad Girls). Nick Workman was obviously having his hair done! 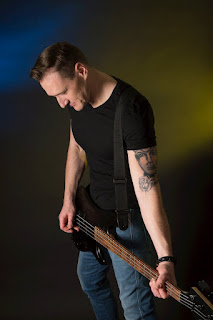 With all the Vega-ing, and Midnite City-ing, this is a Ronseal album straight out of the box. You know what you’re gonna get, and its gonna be good. ‘You Want It You Got It’ sprints out of the starting blocks like a stabbed rat. Its a good riff, and an instantly sing-able chorus. Whats not to like? Well, nothing thankfully.

‘Night Time City’ is another in the ‘big sound’ vein, and just like Vega and Midnight City, I’m already seeing a pattern. ‘’Only A Heartache Away’ is a ballad of sorts, but in a Ted Poley vein, a harder edged and melodic ballad. ‘Heart Go Wild’ steps back on the gas to anthem-ville! ‘I Don’t Want To Live’ is all about the chorus, and it’s a big one. ‘Never Surrender’ is as 80s as Coverdale’s legwarmers, and would be a shoe-in for MTV back in the day. ‘Heartbreak Suicide’ could only come out of the pen od someone like Wylde in 2019, thanks to his random song name generator, and a knack for a riff / bridge / chorus that few can copy, or emulate and is one of the stand out songs on the album. ‘In The Night’ reminds me instantly of JonBon or Poison in their element – all cowboy boots, leather chaps and it would have had a hand 1000s of births if it was 1988. It’s a little belter. ‘Bad Girls’ riff is laid on the foundation of ‘You Give Love A Bad Name’ and you can tell is a Martin penned tune just by the number of ‘whooaa’s’ in it! ‘Shot In The Dark’  is a blend of Robin beck, and Vinnie Vincent’s Invasion, if that’s ever possible. I must cut back on my meds. Its soon onto the last number, ‘Waiting On You’ which again has a nailed down chorus.

All I can tell you is that Nitrate has some powerful tunes with Thurston’s riffery and playing some of the best that’s this side of Ritchie Blackmore's wig.

I do have one tiny irritation and that’s Linstrand’s phrasing of the word ‘you’. But then again, his English is definitely better than my Swedish, so I can go and bugger right off.

It’s hard not to make comparisons to Teenage Vega City, or Midnight Vega, when the songwriters concerned want all the songs to be an anthem, or a big number. And that’s a good stall to set out. With Nick Hogg pulling the bass strings of a puppet-master, he has pulled off a shrewd move and come out the other end with an album that will be at the top end of the best lists come the year end. I’ll have to go out and get my mitts on the debut.