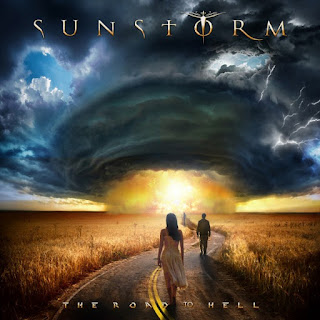 The blurb from Frontiers sent to me by Gary Levermore at Frontiers stated that “Any hardcore fan of hard rock will certainly be no stranger to the story of Joe Lynn Turner’s career. From his early days with Fandango to his successful stints fronting Rainbow, Deep Purple, and Yngwie Malmsteen and through his heralded solo career, the New Jersey-born singer has had his vocal talents on display for decades now”.
Well that’s pretty accurate, the rest of the release went onto Sunstorm who I’ve only recently bothered to listen to because basically I’m a lazy git and typically missed decent music.
I’ve seen JLT a couple of times and he’s still got the pipes (I think is the way of saying he’s a decent singer). That said I think JLT would do better just doing Sunstorm stuff with a few Rainbow classics chucked in (please don’t tell me he did and I missed it which is very possible). I refer you to the previous lazy git comment.

It did accurately stare that “JLT’s vocal talents shine so brightly in when performing this style.” Well that is indisputable. The lad can sing.This review comes to you courtesy of Britain’s Got Talent (if ever there was description of a show that should be investigated by the Trades Description people). What happened was: I’d had a quick listen to Road To Hell, it left me a bit “Meh”. However Mrs W put on BGT and I fired up my headphones and spent 3 nights playing Road To Hell and whilst obviously similar to Edge of Tomorrow it grew on me…..a lot.

To seal the deal last night I had to walk 2 miles home after an unplanned piss stop on my train home. I had 2 options, the walk and a pee or swamping the train as Scotrail had an out of order bog. I found a suitable tree hidden from CCTV, unloaded a couple of pints of Stella (other suitably strong lagers are available) and set off home with Road To Hell in my ears. A far better option than the drunken chat of fellow travellers and piss soaked jeans.
My ignorant review is as follows:
'Only The Good Will Survive' – a fast bouncing start with high energy that falls into a catchy chorus and the JLT voice still as strong as ever. For me the guitar riff is what drives this in-between choruses. There is no denying the catchiness of the riffs and the fact this is a quality melodic rock opener.
'The Road To Hell', the title track starts with a slower heavier feel and a slow building sound that isn’t unlike the vibe from the Straight Between The Eyes album released about a million yeas ago, it also wouldn’t be out of place on a Magnum album and I mean that as a compliment. 'On The Edge' – straightforward melodic rock with real quality with the inevitable Hardline feel that Alessandro Del Vecchio brings to the whole album. Again the chorus is a belter, the guitar again underpinning the whole song.

'Blind The Sky' – A pick up from On The Edge with more urgent feel and the layered chorus has a great feel and the song just has that bit more about it. The backing vocals and more vibrant guitar making a superb song. 'My Eyes On You' – keyboard intro with guitar coming over the top, dare I say it again, it has a real Hardline feel and the song has a retro feel to it, the vocals are pure quality. 'Future To Come' – top melodic rock intro that fires into another pure AOR piece of work, not my favourite but the quality of the musicianship can’t be faulted. 'Everywhere' – ballad, the piano and JLT voice build up to the guitars coming in to lift the song. The JLT voice simply has great tone and an effortless way of hitting the notes without straining even on the higher ones.

'Resurrection' – a much faster full on rock song with a nod towards Death Alley Driver but with a modern feel. It speeds through and whilst not ground breaking it does the job. 'Calling' – Hardline start and a piece of melodic quality. As with all previous songs the sound and feel are of a bunch of mature musicians who can play this stuff in their sleep. 'State of the Heart' – a more intense feel, the most complete and full sound on the whole album in my humble opinion although not the most memorable song because some of the previous tracks could do with this production. Guitar solo by Simone Mularoni is sweet, short and to the point. 'Still Fighting' – it reminded me of something and then I realised, it was very similar in feel and tempo to Only The Good Will Survive down to the opening riffs almost being twins. It was a bit like the time I saw Europe at Milton Keynes and they opened and finished with The Final Countdown. To be honest the first time was superb, the second time obviously lacked the impact of the first although still grabbed your attention albeit you feel slightly cheated.

Sunstorm are melodic rock quality, the addition and input of Alessandro Del Vecchio is clearly apparent and the Hardline influence is there to be heard. This is not a bad thing although I dispute the claim that the last 2 albums are particularly “heavier”. The first 2 are well worth a spin. The choruses are catchier than an STD and the production and musicianship are stunningly good.

I was won over, play Road To Hell a couple of times, it’s a grower and Sunstorm are a proper band and not just a JLT ego trip, the sum of the parts etc.

NOTE - Joe as a Rainbow fan, I hope you are recovering well after your recent heart attack. We are not ready to lose another giant. We wish you well in your recovery.