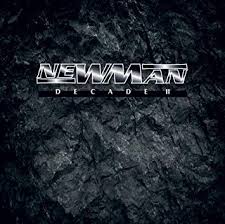 WOW AND WOW!! Newman are definitely a band worth spending a few shekels on.

2018 is the 20th anniversary of Newman. Steve Newman (leader singer guitarist and songwriter) decided to celebrate this with "Decade II" following the same format as the first Decade release. A 2 CD 34 track album covering the bands history from 2007 to the present. Disc 1 features 17 songs from the 2007 album “Primitive Soul” through “The Art Of Balance”, “Under Southern Skies”, “Siren”, and finally the 2015 album “The Elegance Machine”. Disc 2 features another 17 songs, some that were written and even recorded, but not included

I was asked by the bold Chesy (Paul Chesworth) to review the Newman release. He told me “I think is this the kind of stuff that’s right up your street”. He wasn’t wrong. What he never told me was that there was 34 tracks on the Decades album(s). Let’s just say that whilst I’ve seen the band live I was probably not 100% engaged as I talked to mates as they did their thing at Firefest. This album highlighted to me how ignorant I was and whilst I’ve always enjoyed them I never fully appreciated how good the music is……until now.

Obviously if you’re a Newman fan you know the first 17 tracks but fuck it, I’ll review it as if you’re a Newman virgin. Newman are simply superb, there are heavy rock tracks, they have ballads, blues and a whole lot in-between. I won’t insult you by reviewing every song, I will share my favourites, this is difficult because there are so many songs that leave a real imprint. Give it a chance, I will guarantee you’ll find at least a couple of dozen tracks you’ll like.

Reviewing an album is a challenge, reviewing 34 tracks is mental. To be honest I don’t know any band who has recorded 34 perfect tracks. AC/DC did 'Back in Black', 'Powerage', 'Highway To Hell' but that isn’t 34 or perfect.The CD kicks off on a high tempo right away with 'Hero To Zero', 'Heading For Your Heart' and 'Ghost In The Night' (which is a melodic rock master piece). Possibly my favourite tracks are 'Feel Her Again' and 'Stay With Me', the latter similar in sound and feel to the Hardline track “Stay” which I think is awesome. The slow build up and a chorus that had me bouncing around the kitchen. Stunningly good. FFS, the chorus is magnificent and the song just flies away with a superb solo. It must be melodic magnificence as my wife (who is a boy band junkie) asked me to play it again.

“The Elegance Machine” is a wonderful mix of guitars and vocals and then we get “Killing Machine” which is so Magnum-like I’m tempted to send this to Bob Catley and Tony Clarkin for verification it’s not them. The keyboards and layered vocals are just sublime. 'Primitive Soul' is so Van Halen with the opening riff of Panama I nearly spat my Guinness over the keyboard (other stouts are available). The song is superb, that’s why Newman are so good, they take and re-use the best and make it their own.

'Fire With Fire' has a touch of Whitesnake when Coverdale could sing and the snake played real blues. It highlights the diversity of Newman perfectly.The first CD really is awesome. If it was a set list then I’d bite your hand off for a ticket, I would say front row but I’d need a beer and pee and lose my spot.

“She Walks In Silence” is a song with a massively powerful message: “ She walks in silence, it’s all that she can do and he turns to violence”. Bloody hell, what a well written song that highlights that domestic abuse happens all the time, It reminds me of “Never Again” by Nickelback or “Punch and Judy” by Fish. Personally I think any man who raises his hand to a woman is no real man. “Had Enough” is another proper melodic rock tune with an underlying frustration eloquently described. Newman are one decent band, they play songs that remind me of Dio, Hardline, Journey, especially “World Keeps Turning”..

“Crossed My Heart” is an emotional filled classic, simple structure and a tear jerker, a song about bereavement. “When you crossed my heart, I hoped I’d die with you, we lived on borrowed time, you were gone too soon”. It reminded me of my Dad who passed away 20 years ago and it hit a real nerve, I’m not ashamed to admit this song made me have some dust in my eye. (I will also admit I didn’t expect to die with him even though his driving was hair raising at times!). “Does It Feel The Same” is a superb ballad, the Newman voice is haunting and stunning with poignant lyrics as does “A Witness To Loves Decline”. This band have great songs coming out of their ears. “Never Becomes Again” is yet another proper rock track, it has the riffs and vocals that makes me realise why I love melodic rock so much.

34 tracks to cover 10 years? Keep going for another 10 years because the music is timeless.

To be given the chance to listen to these 34 tracks and offer an opinion is a humbling experience.