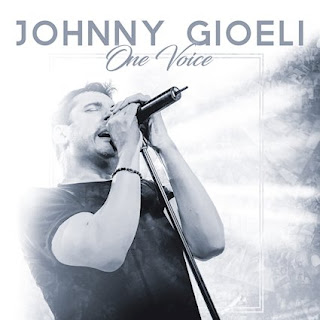 Johnny Gioeli has been around the rock scene for yonks. How long is a ‘yonk’ I hear you ask, reader? I think its about 10 years. In bands from the age of 15/16, Gioeli was a member of Brunette, but it was Hardline where he shot to prominence. Unless you’re a fan of either Hardline, Axel Rudi Pell or Crush 40 then you probably haven’t heard of him. If you’re already a fan, welcome to ‘One Voice’. If he is new to you, then where the hell have you been?

I get the feeling that Gioeli is a thoroughly nice bloke. The kind of fella you could have a pint with. What makes him even greater is the fact that a big portion of the money raised for this album through a crowd funding campaign is going directly to help a young man named Joe Barber who needs help in his recovery from an accident last year that has left him paralyzed. There needs to be more people in the World like Gioeli, and I hope the rock community gets behind him in this excellent cause

In moving away from the band scenario, does a solo album give him enough freedom to express himself? I would say its a big, fat YES! ‘Drive’ comes out of the blocks with a big, positive vibe. Driven forward by an FM friendly guitar sound, it’s a 'crank it up with the top down' number. ‘It’‘s verses reminds me a bit of Incubus without the widdly-wicky-waa bits. Again it’s the uplifting chorus that grabs you. Title track ‘One Voice’ shows that Johnny is not afraid to mix it up a bit. Yes, its still another punch to the gut with the instant likability of it, but its as if John Mayer and Jon Bon Jovi got together and ‘One Voice’ was the result. ‘Mind Melt’ is just another now trademarked slice of GJ radio friendly rock. ‘Running’ is yet another song where its all about the chorus, and a song so Bon Jovi like, I had to check the credits to make sure it wasnt him! So far in, theres nothing new with any of the songs, but the way its has been done has been done ever so well.

‘Deeper’ is the first lighter/balladic song on the album, and I particularly like the guitar playing from Gadrix. As you would expect, a song that’s called ‘Hit Me Once, Hit Ya Twice’ isn’t gonna be a ballad! It’s the heaviest intro so far, and the Ronseal go to rocker on ‘One Voice’.  ‘Price We Pay’ is the big ballad here, and it has its complimentary big guitar solo tagged on for added measure. ‘Out Of Here’ is a song that is closest to his Hardline persona. Its over all too soon with ‘Oh Fathers’, another big ballad that just draws you in.

Gioeli should be very proud of this effort. If you are a fan already, there is nothing here that’s not to like. He is the kind of person that needs (nay, deserves) to be heard by a lot more people. Its musically away from any of his other music, and he has hit the ground running with this, his personal journey. In all honesty, it’s a Gioeli ear orgasm, with positive, and hugely likeable songs from a very likeable bloke (I guess).

Tracklisting
Drive
It
One Voice
Mind Melt
Running
Deeper
Let Me Know
Hit Me Once, Hit Ya Twice
Price We Pay
Out Of Here
Oh Fathers