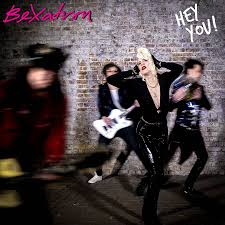 London based glam rock artists are announcing the release of their new single ‘Trash’, soon to be accompanied by a video produced by MHG Music Videos.

‘Trash’ is the second release from their album ‘Hey You’ which launched in November 2018 with their first single ‘Dirty Disco’ receiving both critical acclaim and national radio rotation in the UK, Canada and US.

What began as a song with love as a theme, evolved into a hard-hitting track that speaks to what many now loathe, about modern society; the challenges of daily life, relationships both good and bad and the evils of manufacturing and multinational corporations. They all find their way into the trash and leave most of us trashed.

Bexatron have built a hard-core following of dedicated fans who celebrate the mix between the 80’s rock icons and the solid dose of post punk provocation.

Well known as a ’must see’ live band, their recordings lose none of the energy that they deliver on stage and their new single, ‘Trash’ will not disappoint.

“Certain aspects of London sub-culture make it hard to disassociate yourself from the certain stereo-types that come to mind, namely – leather jackets, exhaust fumes and grit. Seemingly, there is never going to be a time where street level society will become too elite for bands that champion themselves as bridging alternative attitude with high energy fun” – Music News Today