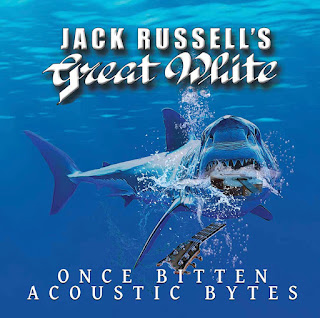 Los Angeles, CA - Vocalist and co-founder of legendary ‘80s hard rock group Great White, Jack Russell, is proud to announce the release of a very special acoustic album revisiting the band’s 1987 multi-platinum masterpiece Once Bitten featuring some of their biggest and most recognizable hits including “Save Your Love” and “Rock Me!” Aided by the likes of guitarist Robby Lochner (who also produced and mixed the album), longtime Great White bassist Tony Montana (now on guitar), bassist Dan McNay and drummer Dicki Fliszer, these songs have been stripped to their emotional core, spotlighting the intensely passionate story at the heart of each song. Just check out the new version of the unforgettable ballad “Save Your Love,” which has been shorn of all rockstar pomp to reveal a heartfelt hymn yearning, love and loss.
Jack Russell explains “Once Bitten is one of my favorite albums that we did. I always wondered what it would sound like done acoustically. The experience recording this unplugged version was really neat. It brought back a lot of memories of the original recording session, things I had forgotten about. Interestingly, the songs that I thought wouldn’t translate acoustically like ‘Livin’ On The Edge’ and ‘Never Change Heart,’ the heavier songs, came out the best. Now, I’m looking forward to doing it again for …Twice Shy!”

There’s a quandary when you have two bands playing the same stuff. Would you rather have a Great White where the singer is no longer a part of the band but has most of all of its original members, or a Great White with the singer (which gives the band it’s sound) with no other originals? I think I would generally opt for the latter. That said I’ve seen the current Autograph, and Queensryche and they both kick ass, so what do I know?

Well, I went through a phase where I loved Great White in the 80s. The first three albums from 84-87 are all little belters. The album that’s on offer here, had for me one of their best ever tracks in Face The Day. This was on the UK album and is sadly missing here.

Well, what I am pleased to write, that this shark still has some ‘bite’, and Jack Russell still sounds pretty good, when other 80s icons have gone off the boil considerably. “Lady Red Light” sounds good acoustically. I’m not sure if Russell can hit the vocal heights like he could back in they day, but acoustically he is fine and dandy. That’s more than suffice. The song is basically a stripped back version (go figure) and even the guitar is note for note as the original. Which leads me to question....why bother? I only ask this, because an acoustic version gives the band artistic licence to mix it up a bit and freshen up a classic. “Gonna Getcha” is similar fare with Russell still following his idol Robert Plant vocally. “Rock Me” one of the best tracks originally, and in this format is mixed up a bit at the beginning to pull you in and see where it leads. Once going, it’s keeps with tradition. ‘All Over Now’ is decent fare, but a bit whiny. ‘Mistreater’ and ‘Never Change’, both not being on the UK version are good enough to make me want to dig out the originals on Spotify and see what I originally missed out on. ‘Fast Road’ itself a fast and frenetic original number is a bit too fast to be converted into an acoustic number, but the vocals and harmonies are good.

This album is decent enough. Others have given better acoustic treatment to their classic work (Tesla). If this Great White arrived at our shores for a gig and these acoustic songs were on offer, I’d take it. Given the option of acoustic, or plugged in, wired for sound wins. I prefer the originals.

There’s good and bad acoustic songs out there. If you want proof of good, check out Swedish band Hellsongs who cover lounge versions of some metal classics, whereby these songs are so different they mess with your head, and I wanted a little bit of that here. The songs are unplugged versions which is fine for most people, but I would have liked Russell and Co. to be inventive and provide something a bit different, even special

Once Bitten Acoustic Bytes will be available everywhere  starting May 1  on digital as well as CD and a limited edition BLUE vinyl LP from Deadline Music, a division of Cleopatra Records, Inc.