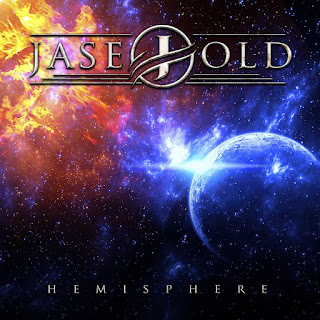 ‘Hemisphere’ is the debut solo album from Jase Old. He of prolific Aussie rock band The Radio Sun and also Starchase. Its TRS where I first clapped eyes on them appearing at HRH AOR for something like 4 years on the trot. In case you’re wondering, he’s the one who usually wears pink and tells jokes.

Some bands have a definite ‘sound’ because of their vocalists. Jase is one such fellow. His voice is pretty distinctive. However, with Hemisphere, thats about to change. Take opening track ‘I Hope You Find The One’ which is a broody, and more emotional song to what you would hear from his day job. The phrasing is different with a bit of Richard Marx rasp and Myles Kennedy (YOTT) going on. It makes for a pretty good start. ‘Tell Me How To Mend A Broken Heart’ follows suit. Despite the jangly keyboard and synth, its honest songwriting wrenched from his experiences. ‘Take Me As I Am’ is a lighter number that is something you would hear on mainstream radio. The reins are off for Jason to roam into different styles.

‘And You’ is definitely from the Marx school of performing arts. Think emotional ballad, and its where we find Jase, opening up and bearing his soul for these songs. ‘Breaking Down The Lie’ is the Jase Old I like best, a song that has a good melody and is more pulsating and menacing. ‘You’re A Star’ is one of the stars on Hemispheres, anyone who rhymes ‘beautiful’ with ‘irrefutable’ gets my vote. ‘Love Is What You’re Looking For’ is old school pop-rock with a nice layered chorus that’s ELO-esque. The title track ‘Hemisphere’ has a lot going on. Its mainly acoustical with a prominent synth beat, but still with a drive and power, that picks up and leaves you wanting more, which is never a bad thing. On ‘One Life’ he sings ‘just give it all you’ve got, you may not get another shot, because there is only one life’. Quite apt. ‘Sometimes’ is on the heavier side of Jase’s style, and is a favourite. ‘Like It Used To Be’ is the closest Jase comes to TRS, which finishes the album on a positive and high note.

I have to say that there’s a lot to like on Jase’s debut. He has certainly mixed it up a bit, as there’s different styles, emotions, and more depth to the subject matter. The songs are varied enough and come at you thick and fast. Its something I want to see developed further as Jase Old definitely has something to say and a solo artist suits him. ‘Hemisphere’ is a very pleasant surprise. Obviously it will attract fans of The Radio Sun, but that’s where it ends. There’s only one song that didn’t resonate with me. The album gets better as you work your way through it, and deserves repeat playing. There’s certainly a few songs here that will end up on my ipad and that’s a tough selection process!!