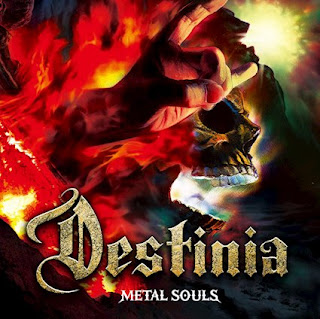 The new generation Japanese guitar hero Nozomu Wakai blasts his way into the world on board his project Nozomu Wakai’s DESTINIA, with music composed / written / produced by Nozomu himself. Nozomu Wakai has previously released two albums, “Requiem For A Scream”(2014) and “Anecdote Of The Queens”(2015), by the project Nozomu Wakai’s DESTINIA. He has been recognized in the Japanese hard rock and heavy metal scene for his contributions on guitar / compositions / sound directions to releases by the country's leading musicians and anime's.

In 2016, during a quest for new musical directions, Nozomu witnessed a stage performance by Lords Of Black, featuring vocalist Ronnie Romero, at Loud Park 16, the world famous metal festival in Japan. Though Nozomu was well aware of Ronnie's abilities, he was hit hard by the new Ritchie Blackmore's Rainbow singer’s live talent. A direct offer was made, and it was decided that Ronnie would join Nozomu and participate as the vocalist in his project.

Having set his musical course for the new compositions, Nozomu made the decision to offer Marco Mendoza, bassist from The Dead Daisies and solo musician, and Tommy Aldridge from Whitesnake, the rhythm section duties to add extra strength to the music. It was an obvious choice for Nozomu's music, demanding the presence of two musicians with vast knowledge of the history of hard rock and heavy metal. Upon listening to Nozomu's music, Marco and Tommy were thrilled to get involved.

Nozomu describes the musical directions and aspirations of DESTINIA as 'classic modern' heavy metal. 'The music goes beyond the authentic hard rock and heavy metal in the same vein as Rainbow, Whitesnake and Dio - it is completed with the contemporary, modern sound styles. I am confident that I can create new music with these musicians.'

I have admiration for Perugino Serafino in moving slightly away from the normal for Frontiers. Don’t get me wrong, Frontiers still has more fluff than a mattress stuffing factory, but the cracks of other genres are starting to appear. With Destinia, if you love your sing-a-long’a’metal by numbers, or a fan of Maiden/Helloween/Firewind/Primal Fear (or anything german) crossed with your classic metal then, dear reader, look no further.

I cant imagine any of the above talent comes cheap. That’s what some of these Japanese guitar players of par excellence do – they have backing to match their twiddly-widdly talent. None of the above will play for food, even for an Italian! The line here up is pure class.

But, just because you can spend £300m on footy players, it doesn’t guarantee a title. Undoubtedly Wakai is a pretty good/shit hot guitarist., and probably has been since the age of seven!  There’s your ‘standard’ metal fare, with some clichéd song titles, and some stand out tracks to be had. Wakais riffage is great, and his soloing is up there with the likes of Malmsteen and Impelliteri. There’s little nods to the likes of Yngwie (The End Of Love), Dio (Raise Your Fist), Whitesnake (Take Me Home),  Firewind (Be A Hero) to name but four. The opener/titile track really grabs you by the ears and showcases the talents of all present here. As a massive Rainbow fan, its good to see Romero getting extra exposure to the wider world. His signing is bang on point, but some of the tracks are ‘samey’ with little texture or light and shade. There’s certainly enough here to drag it above the realms of average. Its probably the most melodic I have heard Romero since he sort of broke out a couple of three years ago

So, as a power metal offering, the songs are good, there’s plenty of melody, the players excellent, but the vocals are within a range that good have greater expansion. As a project, I would have seen this doing a lot better with 3 or 4 singers from this genre to really make the songs ‘pop’. If you’re a fan of the genre it is definitely worth a punt.

Tracks
Metal Souls
Rain
The End Of Love
Promised Land
Take Me Home
Raise Your Fist
Be A Hero
Metamorphosis
Cross The Line
Judgement Day
Ready For Rock
on July 11, 2018