Classic Albums Revisited - No.2 - Icon 'Night Of The Crime' 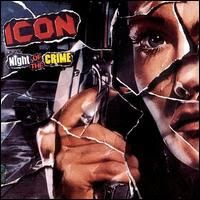 Icon – Night Of The Crime

My contender for a classic album, is Icon’s 1985 masterpiece ‘Night Of The Crime’. It’s a classic album to me, but to any fan outside of AOR then its one that would unlikely appear on their radar. It complies with two out of my 3 statements above.

Ask anyone what their favourite melodic rock / AOR album is and I doubt they will pick anything later than 1992. The obvious choices are Journey’s ‘Escape’, Foreigner ‘4’, Strangeways’ ‘Native Sons’, FM’s ‘Indiscreet’ or something like Aviator, Signal, Giant, and even Michael Bolton. Ask 10 different AOR fans and you will probably end up with 9 different answers. The list is always a decent one and one that you can argue down the pub for hours. My fave melodic rock album that should have sold by the millions is Icon’s 1985 masterpiece ‘Night Of The Crime’.

If a band has a song that turns up on your radio, car stereo etc and you never have to touch the dial or turn it off, no matter how many times you’ve heard it, then it’s a classic. Multiply one track by 10, and ‘Night Of The Crime’ is a perfect album for me. There’s not a single duffer in sight. Fuck, even the gaps in the tracks are worth listening to as they ramp up the excitement level for me.

They were formed in 1981 by high school buddies Dan Wexler (Guitar), Stephen Clifford (Vocals), and Tracy Wallach (bass). By The time it came to NOTC', in came John Aquilino (guitar) and Pat Dixon (drums). The album was released through Capitol Records and was produced by that talented fella Eddie Kramer, and mixed by another legend, Ron Nevison, and it features songwriting talent of Bob Halligan Jr.

For whatever reason I cannot understand to this day, Clifford walked during the mixing process for personal reasons. Fuck, and double fuck.

Any producer/mixer worth their salt can polish a turd. They can make poor albums sound average, and make average albums sound good. One thing they can’t do is to make a shit album  - or an average, or a good album, great. There has to be something ‘there’ already. Icon came to the table with a great set of songs. Much to the point where they are that good a set, the producer would have to be a complete tool to fuck it up. Thankfully everything aligned for one of THE rock albums of the 80s.

Right from the opening bars of ‘Naked Eyes’ Icon and Kramer set the whole tone of the album. The guitar sound on ‘NE’ is just fantastic, and Clifford’s vocals are crystal clear. Nothing is fighting with each instrument to be heard. Bass lines and drums thump away at your body, particularly on Hungry For Love. More on that later.
Full album on YouTube (above)

‘Missing’ is an AOR gem, from the opening parpy keyboards and the wailing backing vocals, before the wonderful bridge and chorus. ‘Missing’ is one of the top songs of this genre bar none. ‘Danger Calling’ is one of the more harder edged songs on offer, but again the chorus is instantly memorable. ‘(Take Another) Shot At My Heart ‘ has that Wexler guitar tone that should have made him a household name. ‘Out For Blood’ builds on the 'Danger Calling' sound and is a twin guitar lovers wet dream of a number, particularly the intro, and is the nucleus of 'NOTC'.

‘Raise The Hammer’ moves slowly along with its pounding and menacing beat, and ‘Frozen Tears’ is the obligatory 80s AOR ballad, and sounds like its straight out of an eighties soundtrack. ‘Whites Of Their Eyes’ is as good a song as any of their hair metal counterparts could muster. ‘Hungry For Love’ was put on a compilation tape by my mate, and this was my Icon introduction, and gave me the fuel to find this album by hook or by crook. It’s a power ballad of the highest quality. The bass note 39secs in is just immense. I still play this song as loud as any of my equipment will manage to go. The album is over all too quickly with the powerful and anthemic ‘Rock My Radio’

Yes, others will undoubtedly spout Journey as the greatest AOR band, and they truly deserve their place in rock history. ‘Night Of The Crime’ has a very high bar set for this genre. Clifford's vocals are some of the best ever to be set to vinyl, and Wexler and Aquilino’s guitars are to die for, making ‘NOTC’ my contender for an ‘every home should have one’ and a classic album of AOR or any other genre.

The actual ‘crime’ is how the hell Icon didn’t become a huge band, as the talent is undeniably on show here. The fact that it all went tits up before they had the chance to finish what they had started is a crying shame. Icon are the only band from the 80s that I would literally kill to have seen back in the day.