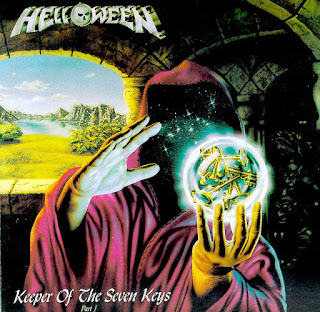 We thought it would be good to start a servies of reviews on what we feel are classic albums revisited, or are long forgotten classics, classics that should have been, or are under the banner of an 'every home should have one'. Basically shit hot albums that deserve a write up, a dust off and played at maximum volume

First up in the series its Helloween's 'Keeper Of The Seven Keys, Part 1'

I’ll never forget my first live taste of Helloween. The infamous and ill-fated Donnington ’88. Helloween were first act on. Me and two of my friends were about a quarter of the way back when the Bailey Brothers introduced the band. Suddenly a huge void appeared and we ran and ran as quick as we could to the front. I stumbled, got picked up and the first thing I saw was Kai Hansen strutting into ‘A Little Time’, fag three quarters smoked dangling from his smirking lip….and then it went crazy. I’d lost my friends but I didn’t care. This was Helloween, and I was right in the thick of it.


Hearing the tracks live just reiterated what a superb band Helloween were…………for four albums, and Keeper (Part 1) being the best of the bunch. Everything about Keeper (Part 1) was superb. The artwork, gatefold sleeve packaging, blue vinyl (if you were lucky..I was!). A proper complete package.

And so to the music. ‘Initiation’ is just the perfect intro for both the album and live. It’s superb guitar work and eerie harmonies work just brilliant and keep us expecting and waiting for ‘I’m Alive’. The opening riff showing you every reason why these guys were parallel with Iron Maiden for style and creativity. Inge Swichtenberg’s (R.I.P) sublime double bass work in this being the main attraction as the song gallops through at stunning pace.

Being Michael Kiske’s first album for Helloween, it didn’t take long to realise why the band made the decision for Kai Hansen to step down from lyric duty and concentrate on his guitars. I thought the band sounded great with Kai on vocals, but Kiske has took the band to a new level by the time ‘A Little Time’ isn’t even a minute old. Very Bruce Dickinson-like but who cares? Maiden did exactly the same with Di’anno didn’t they?

There’s no let up for pace as we hit ‘Twilight of The Gods’. Another galloping effort on a par with Maiden’s ‘The Trooper’. Lots of double bass pedal work and a very catchy chorus. Some nice harmonies in the verses too and awesome duo guitar soloing between Hanson & Weikath. Great stuff. ‘A Tale That Was Right’ gives us a breather and lets the band show us what they can do by slowing stuff right down. I’m hearing a harpsichord, acoustic and a beautiful guitar solo starting us off. Some great lyrical work from Kiske going on here. I can honestly say at this point in both Helloween’s & Maiden careers I would have to say Kiske was a far better singer than Dickinson, hitting every high note with ease while still sounding like there’s plenty left in the tank. This is a proper 80’s rock ballad but it works a treat with the solo’s in the middle.
‘Future World’ gets us back up to speed. Lot of similarities with ’22 Acacia Avenue’ here just before the verse kicks in. I’ll be honest, back in the 80’s when this album came out I knew there was similarities with Maiden, but never this much. But I don’t care, it’s still a classic album in time. And so to the ultimate finale….’Halloween’. From it’s haunting opening riff this song has you hooked through all 13 minutes and 18 seconds of it. It’s eerie, deep and moody beginning sounds like something from a horror movie, absolute classic stuff. We then gallop though the verses and chorus’ until the songs heads off into a different tangent. I suppose this is Helloween’s attempt at ‘Rime Of The Ancient Mariner’, and it doesn’t disappoint. We’re suddenly into a building up tempo and then head into the guitar solo’s. Breath-taking, as the song continues to tell it’s tale through stop-start and very clever musical pieces, with the music itself doing a lot of the talking. Whatever I write will not do this final masterpiece justice.

‘Follow The Sign’ brings us back down to earth and takes us right back to the start and gets us ready for Initiation again. A classic album from a classic time. I’d love to go back to the day I bought this album and heard it for the first time. These times are few and far between. Needs to be heard.