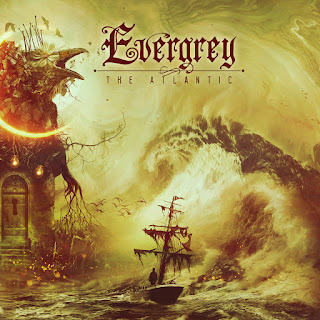 Evergrey are a metal band from Gothenburg, Sweden. Founded in 1995 they released their debut LP ‘The Dark Discovery’ in 1998. Twenty-one years and 10 albums later, they hit us with this latest release, the closing epic tale of their ocean trilogy titled ‘The Atlantic’.

Having had the initial completed work stolen from a break in at their studio, Tom Englund admitted that what has been released here may not have been quite how it would have been.

But what a release it is. As the opening chords of ‘A Silent Arc’ hit us, there is just something straight away that tells you that this is going to be a good listen. From it’s thunderous start, to it’s laid back bridge, to it’s beautiful chorus. This is my cup of tea. Proper power metal, chugging away just nicely. An epic 8 minute opener, it has everything. Soul, mood, anger, peace. What a statement of intent this is. 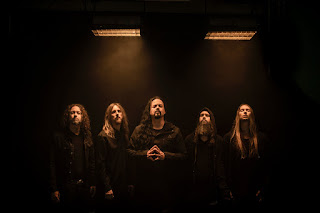 ‘Weightless’ very quickly merges thrash, metal, piano and progressive rock all into one. There’s lots of atmosphere here the Evergrey way; and it is an early front runner for song of the album with it’s powerful riff and commanding double bass drumming. The moody ‘All I Have’ greets us with an atmospheric gloom, but this soon lifts into a chorus full of hope. It’s another lengthy number at 6min 20secs. As I take in Danhage’s solos in this technical masterpiece I can feel myself drifting into another universe as they grab me by the scruff of the neck. Powerful stuff.

‘A Secret Atlantis’ whisks us away almost immediately from the drifting atmosphere of ‘All I Have’ and straight into more power metal. On first hearing this song, you get the impression it’s going to be a short track. Not on your nelly. More technical structure and speed changes make this almost another 6 minute epic. ‘The Tidal’ is a short and beautiful one minute interlude which sucks you back into the ‘Atlantic’ way before ‘End Of Silence’ begins with one of Evergrey’s renowned chugging intros. Tom’s lyrics on this track are a major highlight of this album. The music follows Tom here until it breaks out into a rather technical but relaxing solo from Danhage. The chorus in this track is outstanding. Heavy yet melodic. Super stuff.

It’s safe to say as we travel through ‘Currents’ beautiful nautical themed outro and into ‘Departure’ that Evergrey have more than excelled themselves with ‘The Atlantic’. ‘Departure’ sports some stunning bass sounds by Johan Niemann. ‘Beacon’s’ haunting intro and ‘This Oceans’ stunning attack of an opening riff are the final pieces of this superb jigsaw. This trilogy’s epic closer is not to be missed.