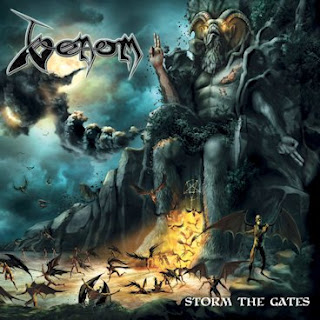 Formed in Newcastle in 1979, Venom release their 14th full length studio album. I for one am interested in what’s on offer here. Venom are a band I had heard of whilst growing up in the 80’s, but incredibly I never got to hear any of their music.


So I am coming into this one with a ‘blind ear’ so to speak. Is it a bad thing? Maybe. Is it a good thing? I personally think so. I can feel free to review and not compare this album to any of their previous stuff.


When an album starts with a riff such as the one in opener ‘Bring Out Your Dead’, I can usually tell what sort of hour or so I’m going to have. This hits hard and heavy from the off. It’s a killer riff. Pounding, loud and a great opener to the album. I’d say it feels harder than the 1980’s metal I thought I would be listening to. ’Notorious’ ups the pace. Lovely galloping riffs in this. It’s heavy again and leads nicely into ‘I Dark Lord’s’ eerie intro. This doesn’t last long as Dante treats us to some pummelling, ear bashing double bass drumming.


‘100 Miles To Hell’ gives us a more ‘stadium rock’ track. Nothing wrong with that, but I’m in two minds at the minute about the production of this album. I’ll get back to you shortly.


As we hit ‘Dark Night (Of The Soul)’, I have to say the crunching opening riff is somewhat spoilt by Cronos' lyrical content. Doesn’t work for me. Musically great though. I’m hearing lots of Motorhead similarities here. ‘The Mighty Have Fallen’ starts like a steam train and doesn’t stop as it’s heavy and fast riffing, together with Cronos' Tom Araya style lyrics continue throughout.

Another track to mention is ‘Over My Dead Body’. This is by far the best track on offer here. It’s structure, pace and power rise above anything else on this album. It’s also the longest track on the album at just over 5 minutes.


Going back to the production here. There’s something seriously wrong with the drums sound. Remember Metallica’s ‘…And Justice For All’ album?? That’s exactly how the drums sound here. They are too distorted and it makes them sound like they were recorded in someone’s basement.


But I’ve heard enough of Venom here to realise that if they toured in my area I would definitely go and see them. I can’t compare this album to older material but from me this gets a big thumbs up.


8. The Mighty Have Fallen
9. Over My Dead Body