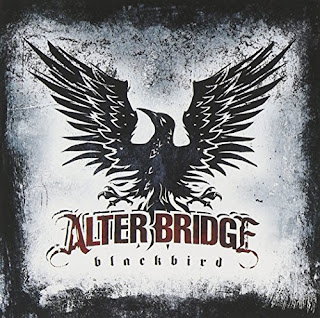 Alter Bridge hit us with this their sophomore offering, but will it be sophomore or sopholess (see what I did there!). Also will it be enough to shake the ‘Ties That Bind’ of the constant reminder that is/was Creed. The Creed tag never really effected Alter Bridge in ‘ol Blighty, but the U.S. is a different matter entirely

Alter Bridge hit a home run when they recruited Myles Kennedy, a vocalist (and also excellent guitarist) whose previous band was The Mayfield Four. Similarities between AB and Creed were bound to come thick and fast, in snippets there are musical similarities on the first album, but with a settled and comfortable line up AB now have a better singer by Myles (I did it again)

Blackbird has allowed them to break free and become purely Alter Bridge. This album is a much heavier album but still holds on to the melodic choruses and crunchy riffs of One day Remains. The music is not a pretentious ego fuelled statement. Instead we get a pure rock album without the full-on ego trip.

From the opener ‘Ties that Bind’ with its chorus ‘One last hope/To rise and break away/Above the faded line/Way beyond the ties that bind’ and ‘Brand New Start’ ‘God how we ache to be free/We’ll make our way’ the crux of the theme is FREEDOM. Freedom from the record company, Wind-Up, from who they had to buy out their contract, and freedom in clearing the Creed tag.

Title track ‘Blackbird’ is not only the best song on the album, but also one of the best songs I’ve heard…ever! This could be THEIR ‘Mistreated’ ‘Heaven & Hell’ ‘Stargazer’ etc and is one to played live for many a year. Weighing in at a hefty 8 mins it honestly felt like a 3 minute single, such was the listening pleasure. Sucked in by the personal lyrics ‘ Blackbird ‘ is a haunting song inspired by a dear departed friend of Myles which builds to an assault attack of a solo by the vastly underrated Mark Tremonti who is a master of crafting a well constructed solo, both intricate and mesmerising.

Hook after hook entwine with memorable choruses and a pulsating rhythm section. In the main the songs are punchy and rockin’and are destined to become modern classics.One of the surprises is the ballad ‘Watch Over You’ which is destined to become a staple on the live circuit.

Alter Bridge have a collection of songs they can be very proud of. With the record label issues now behind them, they can now get back to launching themselves on the rest of the world. Fame surely, has to beckon. Existing fans of Alter Bridge will be delighted with this album, for potential new fans, if you want to buy and try out a band you’ve never listened to before, then look no further than this, I swear you will not be disappointed. My favourite album of the year!