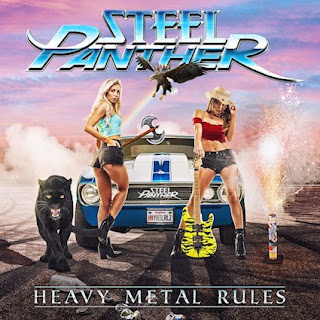 I saw Steel Panther for the first time supporting the Leppard and Motley Crue  Mirrorball Tour back in December 2011. Anyway, I had already got the album, partially dismissed it as a bit of fun, and went along mainly to see Motley Crue. How. Naive. Was. I? Very it seems, as Steel Panther were the best 80s hair metal band on that bill, for any other come to think of it that I had seen for quite some time. They were great, funny as anything, and proved there and then that they were onto something special. 80s originals have tried (and failed) to write songs like Steel Panther have these past ten years or so. They have almost single handedly kept hair metal alive when it was close to being read the last rites. 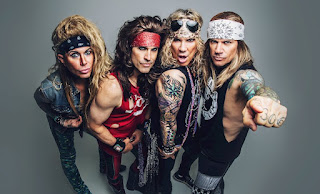 So October sees the release of ‘Heavy Metal Rules’ their fifth studio release. It opens up with a clip taken from ‘Heavy Metal Parking Lot’ called ‘Zebraman’. Go looking for it if you’ve never seen it, as it is priceless! What you get are the usual high standards of smut - ‘All I Wanna Do Is Fuck (Myself Tonight)’, ‘Always Gonna Br A Ho’,  ‘Im Not Your Bitch’, ‘Fuck Everybody’ and ‘Gods Of Pussy’. The bar is set high with ‘All I Wanna Do is Fuck (Myself Tonight). It follows the now standard formula for a Steel Panther anthem, shallow as gnats piss puddle, but a belter of an opener. ‘Always Gonna Be A Ho’ is their maturer ‘Community Property’ with the classic line “Has your vagina never seen the shade” and “I kissed your mouth and tasted Satchels dick”. Mercury Prize, please take note!!!! 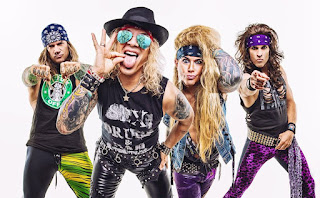 Its the likes of ‘Fuck Everybody’, ‘All I Wanna Do…’, ‘Heavy Metal Rules’ with its Sabbath-esque riff, but a bit of a repetitive chorus, and the wonderfully titled ‘Gods Of Pussy’ (I can already see the merchandising ), that resonate the most and will be remembered in the long haul. One thing is absolutely certain, Satchel and Steel Panther have a Metal detecting ear for a great hook, riff and a chorus. Like I said, single handedly keeping hair metal alive….I mean it! Other than getting into a DeLorean, SP are producing some of the best riffs this side of Warren DeMartini’s poodle perm!