Cryptex - 'Once Upon A Time' Album Review 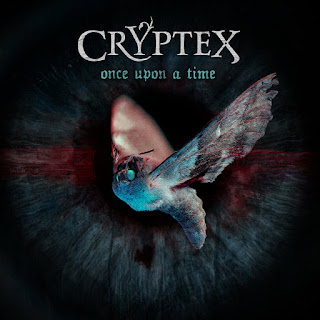 Cryptex - Once Upon A Time

You know that feeling you get when you go and see a band, but have no idea who the support act is, then get completely blown away by said support band. Well Cryptex was one such surprise back in 2012. A very nice surprise, in fact. I was reviewing and interviewing Pain Of Salvation for another site, and thankfully made it just in time to see Cryptex perform. There was nothing ‘normal’ about these three guys, and it made for one the best gigs of the year.

To call Cryptex a rock band is like calling Queen a bit ‘glam’. Like Queen, there’s a lot more going on with Cryptex than a run of the mill band. Sure, there are couple of downright heavy songs in ‘Reptiles‘ and ‘The Promise Keeper‘, where Mertens lets rip with some serious riffage. Most if not all of the ideas come from Simon Moskon. And it’s his vocals, and piano playing that come right to the fore.  It's a big smorgasbord of ideas all clashing and colliding like the CERN particle accelerator, sometimes in just one song. How he puts it all down into a song only he knows, but the songs range from progressive (but not in a snotty prog rock way), but in pushing the envelope, to theatrical, to pomp. It took me about four songs to realise that there is hardly a guitar solo in sight, I was swept up in the storytelling and emotion to care about a traditional guitar solo. That’s what I like about Cryptex. Theres no ‘ tradition’, theres no formula. Rules, formulas and tradition are ripped up and spat out, and are all broken.

‘Once Upon A Time’ is a belting opener, with a pulsating bridge, before a gospel/choral choir style chorus. ‘Because The Reason Is You’ is folky at the off before expanding outwards into porosity and grandeur. ‘Bloodmoon’ is one of my favourites. One of the few 5min plus songs it really shows Cryptex at their finest moments, Moskon builds the tempo from his piano, with some wonderful harmonies and a great riff from Mertens. Also I feel that Simon Schroders drumming is carefully placed, and intricate. It is fair to say that Cryptex throw in the kitchen sink with regularity, but in this instance, it’s the sink, fridge, washing machine, and the mix coming out the other end is lovely. Mid ‘Body Language’ we get a bit of Moskon’s narrative, and it’s not on the side of parody, but Tenacious D almost came to mind.

‘Two Horned Crown’ errs on the side of bands like Epica, Avantasia and Nightwish, again with some great layered vocals and harmonies. Greta Leona Hasenberg adds contrast to Moskon’s vocals on the middle eastern sounding ‘Haunted’. ‘Reptiles’ is the other long number, and it opens with a Tremonti style riff. It also highlights why the Cryptex harmonies are so good as also taking on lead vocals is Mertens, a pretty useful singer in his own right. Andrejkovits weighing in with BV prove Cryptex are not to be messed with. It is probably the closest to the term ‘prog’ as they come. I tell a lie, its the one song with a guitar solo, a song where you don’t know where exactly it is going, but that make it part of the fun. ‘I Dont Know Why’ is where musical theatre meets Jethro Tull, with a nice electric piano refrain, and is another example of their diversity in a single song. ‘The Promise Keeper’ is an out and out rock song for the guys, and prove they can rock it out when the desire takes them.

‘I See It In Your Eyes’ is mainly Moskon and his piano. Its a reflective, and sombre piece. It even ends with whistling, which in itself is haunting and poignant. Who’s have thought it? ‘Leaving’ is the final track, and it’s a spoken word that Simon Moskon narrates with dramatic effect. It builds into a crescendo over the second half, and is quite atmospheric. Then ends. Suddenly. It leaves you wanting more, so I'll add the bonus track which isn’t on my vinyl, ‘Closer’ which is definitely in the realm of bands like Porcupine Tree and Pain Of Salvation. It would have been a highlight of a (excuse the pun)….’Closer’ had it been included.

‘Once Upon A Time’ isn’t the most accessible album you will hear this year, but if you open your ears and your mind to these guys then a world of delights await you. I promise you. Cryptex are my favourite three piece this side of Rush.