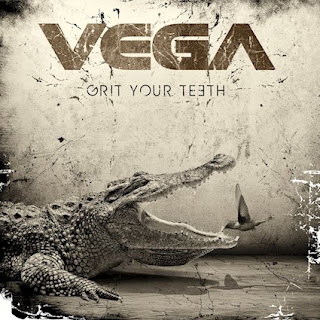 VEGA’s sixth album, “Grit Your Teeth” will be released on June 12th, 2020 and according to the PR bumf, is set to “blow the roof off”. Working with “The Graves Brothers” (Asking Alexandria, Funeral for Friend, The Family Ruin), they’ve pulled out all the stops, disconnected the brakes, and produced their biggest songs for their biggest sounding album yet. Theirs is a brand of music that is as rewarding as it is challenging. This is not the end, but the beginning of an exciting new chapter in the history of Vega.

They’ve toured over the years with Skid Row, Last in Line, FM, Magnum, Joe Elliott’s Down and Outz, Dan Reed Network, and have had festival appearances at DOWNLOAD, Planet Rockstock, Steelhouse, HRH AOR, Rockingham, and the Frontiers Rock Festival in Milan, that have all gone into shaping them into one of the UK’s finest melodic rock bands. The fact that they are not more widely recognised is more down to bad luck than anything else, as anyone that has witnessed them live recently will testify.
VEGA’s members have a rich history, including stints with Kick, Sugartown, and Paul Dianno, but it was their meeting of musical minds back in 2009 that would lead to the melodic rock genre receiving one of the finest releases of that year in the form of their debut album, “Kiss Of Life”.

I think Vega are a bit of a marmite band. I asked recently if one of the other guys would like to review them as it’s always been me, and I wasn’t exactly met with enthusiasm from any of them. After many cracking albums, I must admit that I’ve expected them to kick on a bit. But even gigs the last few years have been poorly attended, and I cant put my finger on it as when faced with an audience like HRH etc, they go down a storm. And rightly so.

So what do we have with ‘GYT’?

Well, on first inspection I’m met with a certain amount of moistness in the nether regions. I don’t know if it’s a concerted effort from the Vegaboys, or if it’s a combination of the partnership with the brothers Graves. Although for me, not knowing who they are at all (Graves Bros - sounds like a removal firm!), I will put it down to a combination of efforts.

With ‘Blind’, Vega jump out of the starting blocks like a stabbed rat with a fire cracker shoved up its arse. There’s a certain amount of vim and vigour that’s being applied, still maintaining the strong melody, but with a bit of welly. ‘(I Don’t Need) Perfection’ proves that the opener is not just a one off. There’s a substance and style here that shows that Vega mean big business with a capital B.I.G. The melodic sensibilities are still there for the fans that expect the anthems, but they are proving that this crocodile definitely has bite! In fact its probably the best Nick Workman has sounded (and he always sounded good!). Title track ‘Grit Your Teeth’ is a stormer, and Jon Bon Jovi should be getting on the phone begging to cover this. No one does anthems like Vega! ‘Man On A Mission’ has a southern drawl opening line before evoking latter day Shinedown, and that’s not a bad comparison to make. ‘Don't Fool Yourself Again’ is probably the best song on the album. It’s a very infectious number, and I strongly suggest you check out the video below, because if you don’t like this, then there is no hope….

‘Consequence….’ Digs deep into the 80s for a Tears For Fears ‘Mad World’ influenced section that I’m sure people of my age will pick up on instantly. ‘This Ones For You’ is yet another positive track, and ‘Battles Ain’t A War’ is a ballad of sorts and is nicely layered and assembled. It’s a very cool track, and I particularly think Thurston’s playing on this is exceptional. Before you know it we are at the sharp end, and there’s still no slack on the horizon - ‘Save Me From Myself’ airs on the side of pop and deserves mainstream radio play; the positive and uplifting ‘How We Live’, and finally ‘Done With Me’  is short, snappy, punchy and rounds of a sterling performance.

I’m not going to single anyone in particular out as all the guys are on VERY top form. A new bar has been set for 2020 and any competition to the Vega throne will need to up their game. ‘The Vega is dead. Long live the Vega’

Could this be the one? I’d certainly like to think so. It’s all anthems and I expected nothing less. It’s such a great listen, that I needed a good old rest at the end as I got cramp in my hand for singing into Gills hairbrush for the whole album.

For me, it’s mainly about the melody, then the lyrics, but without the melody you have nothing. Thankfully Vega get their melody delivered by the truckload. With previous albums not being embraced as they probably should be a (much) wider audience, I was wondering what the next chapter would be in Vega’s history. In the case of ‘Grit Your Teeth’ the new chapter is a blockbuster. If you hanker for the glory days of Leppard and Bon Jovi, look no further, as this is the album JBJ and Elliott would love to be able to make.