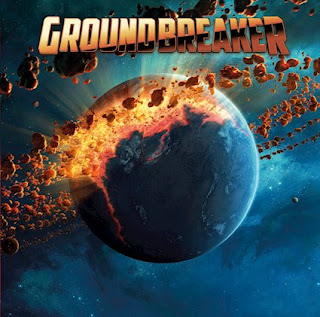 You can spend £300m on a footy team and not guarantee any success. Can you put two European Masters of melodic rock together and bring guaranteed success? Not necessarily. It has worked here, and this is what Frontiers Don, Serafino Perugino has done in bringing Steve Overland and Robert Säll together to make Groundbreaker. Lets face it, it wasn’t going to be difficult to put a project together when both parties have experience in such matters - Säll with W.E.T., and Overland with Shadowman. So it wasn’t ever going to be abject failure. You know what they say, ‘form is temporary, but class is permanent’. Both these fellas are undoubtedly a class act.

The album started with a conversation happened between Frontiers President Serafino Perugino and Overland, eager to start a collaboration with new and exciting musicians from the European melodic rock scene. The idea was immediately work involve Robert Säll of Work of Art in the picture and use Alessandro Del Vecchio’s production. Overland immediately loved the material that was submitted and consequently they started to work on songs.


"I’m the main composer for about half of the songs but Ale and Steve wrote a lot as well,” tells Robert Säll. “I had to write songs with Steve´s voice in mind and that was new and very inspiring to me. But for any fan of FM or Work of Art, I think they will be very familiar with the sound of this record!"


With Säll writing 50% himself, then these songs have more than a Work Of Art and FM sound to them. One thing is for certain, these songs are as finely polished as the brass door knocker at Mr Sheene’s factory.

If you’re a fan of these guy already then it really is the biggest no brainer since you convinced yourself to buy legwarmers in the 80s. Its like settling down on the comfiest of sofas, or chatting with a best mate that you haven’t spoken with in years; you get my drift, right?

‘Over My Shoulder’ is pure melodic simplicity at its best, Overland is Overland, the Ronseal vocalist of his generation, singing with a soul and passion that few can match, and with Säll’s guitar its quickly realized that this is a match made in Heaven, well Italy. ‘Will It Make You Love Me’ sounds like it should be a ballad, but it’s a song with one of the hookiest choruses you’ll hear this year, and any other year. ‘Eighteen Till I Die’ and ‘Only Time Will Tell’ just pick up the batton and carry on the high quality, with the guitar, vocals and keyboard right up, front and centre. ‘Standing Up For Love’ has the parpy, moody opening, extends into a punchier and heavier track with some really nice harmonies; think Michael Bolton.  – not that one, the one before he became the housewives choice. Yes that one.

‘Tonight’ is the first (sort of) ballad on offer and it’s a good one, but not the best on here. The trophy goes to ‘Something Worth Fighting For’. If something like this attracts the attention of Mrs Chesworth on a first listen (who is by far the better reviewer out of the both of us) then I know it’s a good one, and the more I hear it, the more I like it. It’s like waterboarding, only in a fun way! It sounds familiar, like you’ve known it for years, and deserves to win an award, as its that good. Overland projects his vocal prowess, showing emotion and passion in his vocals, and in this one song alone, proves to the World why he is called ‘The Voice’.

This is one project that definitely has legs and could see the partnership blossoming and around for many years to come, and could outlive their current day jobs. In leaving the knob twiddling to Del Vecchio its enabled them to create one of the best melodic rock albums of the year, if not the best. I could imagine this in full Foreigner mode live, with a choir ramping it up to eleven!

‘The Sound Of A Broken Heart’ highlights the assets of all here, its  everything coming together for the greater good. It’s the five guys working in harmony. ‘First Time’ comes with Overlands trademarked ‘whoa-ohhs’ and starts off as one song, and switches the chorus to a more powerful force and back again. It’s a nice  balance and very 80s. ‘The Days Of Our Life’ is an upbeat song and typical Summer song that would have dominated MTV. The album is over way too quickly with ‘The Way It Goes’ and I have pretty much run out of platitudes at this point.

Groundbreaker have come to the part with eleven songs all being of great quality, with not a duffer in sight, proving you don’t need to come armed with 17 songs and a running time of 75 mins. It’s the best 2635 seconds you will hear all year!

The keyboard sounds and overall production on this are just fab, and I have to give credit to Alessandro Del Vecchio.

Frontiers have been pumping out a lot of albums the last couple of years with many being average at best. There have been some nuggets from them along the way, but now’t comes close to this for the label.

Sod the young guns. Guys if you want to up your game then you need to be watching (and listening to) the older guard, as four of the best melodic rock albums this year have come from NHA, Airrace, Perfect Plan, and now Groundbreaker. They’ve upped their game, now up yours.

If you’re a fan of melodic rock, and you don’t like this, then you’re not listening hard enough.