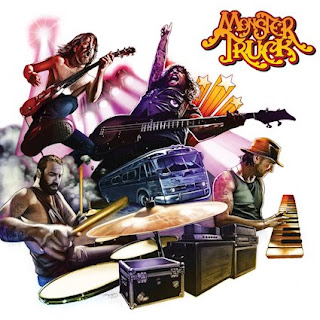 Monster Truck, whilst not brand new, are one of the newer guns so to speak who have pretty much hit the ground running and produce straight up, balls to the wall, heavy rock, with more than a bluesy feel to proceedings.

Its been two years since the excellent ‘Sitting Pretty’ was released. Since then they have played over 150 shows supporting such luminaries as Nickelback, Billy Talent, and Deep Purple. During this time on the road MT took a recording rig out with them, sending songs back and forth to producer Dan Weller, the guys not wanting to waste any time when inspiration struck. Jon Harvey says ‘We want people to listen to it and have fun’ which pretty much sums up MTs mantra and style. Next year sees the guys cement 10 years together, and have achieved a huge amount in that time – for me it was seeing them play in support of their debut album in front of about 280 in a hot and sweaty Manchester, with me being that close to the band, it felt like I was on stage with them. You don’t get many gigs like that these days. In fact, my son had a Marvin Berry moment the first time he saw them at Download fist act on the stage. He calls me up and says ‘dad, you’ve got to listen to these’, and held the phone up for their first song. We were hooked.
So, its fair to say, I’ve watched (and listened) to them grow and develop almost from the beginning, and predicted great things from the Canadians. So what do we get with ‘True Rockers’ as my first experience with the video of ‘Evolution’ nearly put me off them completely! More on that song in a minute. Thankfully MT hit us with their unmistakeable force on opener and title track ‘True Rocker’, and it picks up straight where ‘Sitting Pretty’ left off – and it sees Harvey in full on Preacher mode….putting the word  of the Truck out in the streets along with the Reverand Dee of Snider. ‘Thundertruck’s opening keyboard riff is straight out of Rainbow’s ‘Kill The King’, before the MT wall of sound kicks in, and its so far, so very good. They lyrics are taken straight out of the iSpy book of clichéd rock lyrics, but who gives a truck, when its done as good as this?

A couple of few weeks back, a video for ‘Evolution’ broke. I trucking hated it. It sounded like Shinedown, and not the good version of Shinedown, it sounded like a watered down Shinedown. Living with it a bit longer an it has grown on me a little, but its so different to anything MT have done before, maybe I’m not giving the benefit of the doubt. I don’t think so. Thankfully, that’s as low as it gets for me, as they are firmly back on their feet with the Southern, down,dirty and whiskey soaked lyrics of ‘Devil Don’t Care’, teasing at first, before the harp and groove kick in. ‘Being Cool Is Over’ wears its riff on its sleeve, a punchy high octane number. Attitude is everything in rock n roll, and MT have it by the truck load (sorry), especially with Harvey’s gruff n blues vocals.
‘Young City Hearts’ is as near to commercial as Monster truck get. Its one for the mass US radio stations for sure. They have a big blues soaked ballad in ‘Undone’. When Monster Truck added a keyboardist in Brandon Bliss, it would be easy for him to be overpowered in their brand of music. Fair play, the organ is up front and centre and makes itself known on most of the tracks, especially this one. ‘In My Own World’ is fast and furious for the metal brigade, and ‘Denim Danger’ (great title) with its opening statement ‘whoooaaaah, this is our town, in this place we wear the crown’ (I think!), and is THE anthem for the MT massive. ‘Hurricane’ is what it is, a raucous track. Its like being assaulted with Harvey’s vocals and bass, Widermans riffs , and the blast of Kiely’s drumming. Finally we are on to ‘The Howlin’’, and it reminds me of classic Blackfoot, brooding to begin, then building up to a power and climax of harp, and Widerman’s guitar. A fitting end indeed.

Monster Truck draw on influencers from all over the last 4-5 decades, from the likes of MC5, Deep Purple, GFR, and even Metallica. Despite my dislike of ‘Evolution’, this is an album that should get them up to the next level and beyond. Plus the upcoming UK tour with Black Stone Cherry and The Cadillac Three wont do them any harm at all.

With ‘True Rocker’, its definitely a case of three times the charm. Definitely……as their Merch states...DO NOT FUCK WITH THE TRUCK!