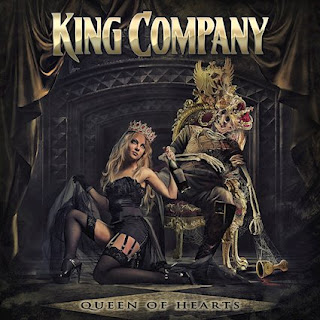 The back story of King Company was news to me. Look, I’ll be honest I write reviews as someone who has never claimed to know every rock/melodic band in history so their story was news to me.

I’m lucky enough to be trusted to give a few new releases a listen and express an opinion. Like anyone else reading this, I’m a rock fan. It’s that simple, no agenda, no pre-conceptions, no bias and just try to give an honest personal view. Let’s face it, we all have differing tastes and one man’s meat is another man’s poison and I know many people who hate Poison, I blame Every Rose.

The history of King Company has a bit of everything, a drummer, Mirka ”Leka” Rantanen (Raskasta joulua, Warmen, ex-Thunderstone, ex-Kotipelto, etc) creating a band with people with whom he had worked with before and whom he knew as both good musicians and friends. I have no idea who these bands are but I will now check them out.

He recruited guitarist Antti Wirman, singer Pasi Rantanen, keyboardist Jari Pailamo and bassist Time Schleifer. They also had links to Mirka’s previous bands which would explain why they joined.

After a few live gigs the band finally released their debut album in 2016 - ”One For The Road”. A title that resonates with my life in Glasgow. It would be rude not to. The album got the band touring and off they went (or so they thought).

After a tour of Finland singer Pasi Rantanen suffered vocal issues that curtailed his future. He decided that as the band were ready to tour Spain and record a second album and he wasn’t, he’d step aside. In his place Italian-Argentinian Leonard F. Guillan took over vocals with Pasi acting as vocal producer.

And so Queen of Hearts was delivered.

Opening track “Queen of Hearts” hits you with a driving beat followed by guitars and the Guillan vocals all at high tempo. It blasts along with every band member playing their part. The vocals are spot on, Wirman hits the guitar solo at pace and the screaming Guillan ends the song with a yell that only dogs will hear. Nice. It’s a good way to announce that you have influences from Dio to er……bands that use keyboards to their finest use.

“One day of your life” dare I say it has a real Scandinavian rock feel to it, again high paced and drums and bass combine superbly leading to a catchy chorus, not catchy in a pop way but more H.E.A.T or Eclipse like.(How to piss off Finnish folk is to compare them to their neighbours, it’s probably like calling Simple Minds, U2 and The Manic Street Preachers English). Guillan sings low and heavier vocals before moving up a couple of ranges to his more comfortable level.

“Stars” is a solid ballad style song but heavier, the vocals ooze quality and the band provide a really strong backline of melodic beauty. It has a chorus that invites lighters to be held up but because of the pace there would probably be a wild fire incident.

“Living in a hurricane” is suitably paced and the vocals and music match the title nicely. The guitar rips out a solo before the chorus returns the compliment.

The almost gloomy and heavy start of “Under the spell” leads into a hauntingly heavy track. The chorus and feel is atmospheric, nicely done lads.

“Never say goodbye” is slower but thankfully not a cover of Bon Jovi’s version. The drums play a prominent part (you’d never guess this was a drummers band!). It builds, the keyboards finally get a chance to shine and the chorus is strong and we finally hear some backing vocals/harmonies. The most AOR song yet, I loved it.

“Learn to fly” – nope not a Foo Fighter cover but a fast paced rock song. It didn’t want me to learn to fly, it didn’t quite crash land but it didn’t take off for me even though it rocked. I was checking for the emergency exits just in case.

“Berlin” is a slower paced track but still has the full band sound behind it. It’s a grower, the band can obviously play, the lyrics are pretty decent but there’s something missing for me but 3rd time around I’m almost converted.

“King for tonight” –the blurb said Magnum fans would like King Company, keyboards lead on this the first song that Magnum fans might relate to. OK it’s a bit heavier but it has that vibe and a sound and feel backed up by keyboards and guitars that gives you that upbeat feel.

“Living the dream” – proper melodic rock, acoustic guitar sound and haunting style vocals which show Guillan has a fine voice full of emotion. OK it’s a clichéd song title but the song lifts it above that.

“Arrival” is the last track. Is there some irony here? It’s a great finishing song, keyboards give it a great feel. It really does a great job of reminding you that this a proper band effort, the whole band gel in a way that highlights the best of the band.

Criticisms:
·      Turn the vocals up, Guillan’s voice sometimes doesn’t get the chance to impress as much as it should do, as we say in Scotland, “he’s a good chanter” and could lift this album up further. I bet live he nails it, have faith in him.
·      Song titles – choose ones not used by previous bands especially if they were multimillion selling songs– Learn to Fly, Never say Goodbye etc, even ABBA had an album called Arrival. Your chances of being top of a Google search are screwed. That said I prefer your version of “Never Say Goodbye”.
·      Backing vocals – need more, you guys can do it, turn them up.

Plus points:
·      Even with the vocal levels the alum shows that Guillan can nail both high and low notes and his voice has depth and emotion
·      The band has a sound of real “togetherness”, it’s not 5 individuals trying to make an album.
·      It has a real proper feeling of rock from Finland
·      Drummers can lead a band (I’ve seen the photo of Mirka and he’d survive happily in any Glasgow back street without having to say a word)
·      I really liked this album, my wife described it as “noisy shite”. That is good considering her taste in music.

So after a few listens, my love of rock music by our cousins in Finland and Scandinavia is reassured. They don’t disappoint.
This album was an unexpected pleasure, the quality was up there, I can’t wait to see them live as I think they’ll be pretty immense. I’m making the assumption they are Finnish, OK King Company may have to be a support act but like Brother Firetribe and One Desire I’m sure they’ll make any band following them shite their pants.

I’ve seen a few support bands in my time who made it. I hope King Company join that company. What ever happened to Guns‘n’Roses, Y&T and Great White anyway? J