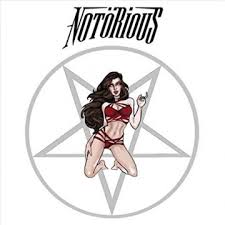 NOTÖRIOUS are located around Bergen, Norway. The bands PR bumf states that “The band was formed in the beginning of 2018 with the intention to bring back to life the classic sound of the hard rock/glam metal bands that ruled the Sunset Strip back in the early 1980s. The band is inspired by classic groups like Mötley Crüe, Van Halen, Yngwie Malmsteen’s Rising Force, Europe, Scorpions, Skid Row and Poison.” I’m going to add Love Fist to that list.


Well….bloody hell! I’ve banged on about up and coming bands doing their homework if they are setting out their stall for a genre that had its heyday with the advent of MTV and was all but dead by 1991. I’m talking about hair/glam metal. Anyway, Notorious have definitely done their homework. Ok, so the sound isn’t original, but what they have done is pretty much knocked this EP out of the park. All the fore-mentioned bands are present and that in itself is great.

Right from the opening riff of ‘Nötorious’ I’m salivating at the prospect of what is to come, and ho-lee-shit these Norwegian metallers do not let me down. I’ve probably got gig tees older than these guys, but they live and breathe hair metal to the core. The riff is superb, the chorus catchy, and the guitar solo from Nikki DeCato is everything you want it to be. Chris Houdini on Vocals hits all the right notes, and its rhythm section just powers it along. (I’m guessing the lads are using pseudonyms!)

Considering this genre was THE ONE to beat in the 80s, lots of bands have tried, and failed to match up to the hedonistic sound of glam metal. Even bands that were the glam forerunners haven’t written songs as good as they did back in the day. I’m not saying that Nötorious have written 80s worthy anthems, but what they have done is epitomise the sound of glam metal, and as far as the last few years have gone, Notorious make for one hell of a promising career. UK festivals take notice, as Nötorious are going to level your stages, take your girlfriends, and leave you begging for mercy!


All they have to do next is come up with enough songs for an album, perfect the Scorpions pyramid, piss against the walls of The Alamo, and they are admitted to the glam rock alumni.


The production is meaty, beefy, big and (you guessed it), bouncy!


One for glam metal purists, and the V-Rock generation. Plus, any band that has umlauts in its name, gets my vote!