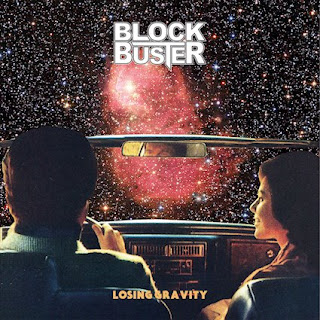 The description of Block Buster (the band, not the 1980’s TV programme or defunct video rental store) from the Frontiers promo info said the following:

“The best way of describing their music would be something like this: take AC/DC and Motorhead, spice it up with some Extreme and Bon Jovi, the rougher side of The Rolling Stones, throw in some hunger and energy of the rock-torch carriers of the newer generation such as Airbourne and The Darkness, add a good dose of modern vibe to the mix, put it in a giant blender and you will have the band’s mind-blowing debut "Losing Gravity”! Enjoy and get ready to be blown away!”

Well let’s just say that I’ve no idea how much the writer had been drinking when he put that out or what drugs he’d taken because it is utter crap. Motorhead FFS? Block Buster are as close to Motorhead as ABBA were.

Luckily the description the band themselves used is far more accurate: “We grew up listening to "classic" rock, but we also like many of today's artists from different genres, who tend to influence us just as much. So, we guess it's a mixture of modern and retro.”

Thank God some sanity prevails. The album is a wonderful eclectic mix of styles which does nod in the direction of the 80’s rock scene but with a healthy dollop of modern indie style rock to accompany it not forgetting a touch of rock rap.

Out In The City kicks the album off with “the” riff that Foo Fighters used on All My Life but this is no rip off or copy, the song kicks in and off we go, buckle up. Great harmonies and a real indication of what is to follow.

Gone By The Morning has a real feel of Ratt at their best crossed with a bit of a modern sound, it works well.

Flammable takes us to full on guitar rock, a driving beat, high octane verse and a great chorus, the song powers on with the dual guitars unrelenting.

Back From The Shadows another decent rocker with a superb catchy chorus, a great piece of melodic rock. It even has a sneaky little key change towards the end just to freshen up the last minute.

Losing Gravity is, and please don’t lose it with me, a song that Oasis, Shed 7 or Embrace would be proud of, it’s got a great retro feel to it and I don’t care, I really don’t, it’s quality.

Sweet Mary Jane – maybe it’s the song title and the way Aarni sings on this but I can’t help but think of a cleaned up Love/Hate. The song benefits from a decent riff throughout and the rap style intertwined throughout the song.

Talking of rap, Move is one of the singles off the album and talk about messing with your head, it has an Electric Boys funk sound, rap vocals that could have come from a heavier version of Uptown Funk and it’s one upbeat belter of a song.

Would You Do It Again is up there in the top couple of favourite songs for me, the build-up of the guitar, the slow burn as the song grows into yet another superbly catchy song that has a real atmospheric feel to it.

This was an album that has been one the best surprises of 2019 so far. Due to the aforementioned guff that accompanied the album I expected a heavy rock album. Now don’t get me wrong there is plenty of decent rock to be had but the whole vibe of the album is a fresh, energetic sound that doffs it’s cap to the 80’s but is still moving forward.

It’s an album that put a smile on my face, left me trying to identify influences, reminded me of so many bands and styles, catchier than a STI, has some superb guitar riffs and fingers crossed that Losing Gravity elevates Block Buster up to the levels of their other Scandinavian rock peers.