The Spectre Beneath - 'The Downfall Of Judith King' Album Review 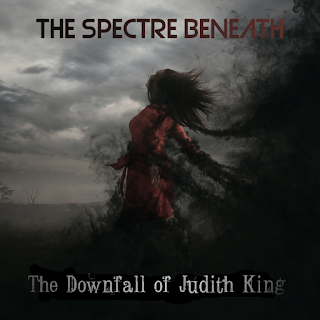 The Spectre Beneath – The Downfall Of Judith King

The Spectre Beneath consists of L Lockser (Vocals), Pete ‘Paz’ Worrall (Guitar/Bass/Piano), and Consta Taylor (drums – Bleak Exist with Paz). All songs were written by ‘Paz’ except one, and all were produced by said ‘Paz’. I have no other supporting PR bumfery that usually accompanies an album release.

However I do know Pete Worrall, not that well, but enough to know he is a talented writer (check out his novels), an extremely good guitarist (other bands/projects include Bleak Exist and also Plague And The Decay), and lover of greyhounds! Also he accompanies another friend of mine, ‘Hedgy’ on the ‘Pictures, Noise and Words’ YouTube channel (Pete’s the one on the left).

I was asked by Pete if I’d review this, which is a bit weird, because if you could compile a Venn diagram of mine and Pete’s musical tastes, about 4 bands would cross over! Generally, we are miles apart, possibly even planets apart. He is a braver man than me.

So, what of ‘The Downfall Of Judith King’? With a title like that, you know its a concept album of some description. I’m crap at explaining albums, so we’ll get straight to the melody….

What happens if you combine the musical melody of a singer like Den Adel, progressive metalness of Devin Townsend, Symphony X, and the riffage of Biomechanical? Well the answer wholeheartedly is ‘There Are Cameras In the Dolls’. The guitar playing is brutal (in a good way), so much so, I had to take the volume down just to concentrate and listen to what my ears were taking in. The riffs are fast and frenetic, and when combined with Taylor’s drumming its multiplies the rhythmic assault. I think the guy has 4 legs based on the bass drum beats coming through. The contrast of L Lockser vocals cuts through the guitar and drums like a knife through butter. It makes for one hell of an opening track.


‘Teach Yourself Guitar (Step 2)’ follows on in the same path. If you’ve got a good formula why rewrite the rule book. Bonus for me? No grunting, well not yet anyway. ‘As The Crows Peck At Your Bones’ ramps up the quality a notch. At this point I’m really liking the vocals of L Lockser, and the rest isn’t too shabby either. The first chance to draw breath comes with the title track, ‘The Downfall Of Judith King’ and acoustic opening, before a more ‘traditional’ rock song ensues. I’ve enjoyed the pace of the album so far, but this is a song that defines The Spectre Beneath for me, and has a very ‘Heaven and Hell’ Black Sabbath bass line running through it for the bridge sections. Six minutes in I half expect Lockser to wail ‘Sing me a song, youre a singer...’. Its by far and wide my favourite song on the album. Mainly because it falls into the Venn diagram section I mentioned earlier. I love this song. All Pete needs to do now, is grow that handlebar moustache!!

‘Mrs Lovett’s Pies’ is another assault on the senses. I don’t know how many BPM we are up to, but lets settle for ‘its lots’. The guitar playing isn’t overpowering in any way, its riffs just come at you very thick and very, very fast. ‘Fragmented’ goes back to the less frenetic pace, and for me its where this album shines. The solo is blisteringly good. The first third of ‘The Plotting Of Judith King’ reminds me of a great rock/prog band called Tilt, in this instance a song called ‘Long Gone’ and in my books, this is high praise indeed. Info the final stretch we get the 'The Abduction and The Questioning Of Olivia Soames’ (2 songs). They introduce a dramatic effect to proceedings, culminating in the powerhouse ‘Questioning Of...’ where ‘Paz’ and the guys throw the proverbial sink at you. If Arjen Lucassen, Michael Romeo and Charlotte Wessels had a threesome, then ‘The Questioning Of Olivia Soames’ is the outcome of such a convergence.

For a bloke whose musical tastes range from the likes of Dokken, to Journey and Alter Bridge, ‘The Downfall Of Judith King’ has been a walk out of my usual comfort zone. Its definitely an album of two sides, the first half is fast, heavy and has more notes than you could care to count. Then there’s the lighter side of the second half, still heavy, but not as frenetic, and its these songs for me where the album resonates the most. There are some bloody good songs on here, in particularly the title track, ‘Fragmented and the latter section. Its a mighty impressive debut and I really look forward to what these guys do next.

Play this album loud, extremely loud. Theres just no other way to.

Luke C.M. - guitar solos on ‘Teach Yourself Guitar (Step 2)’ / ‘As The Crows Peck At Your Bones’ / Mrs Lovetts Pies