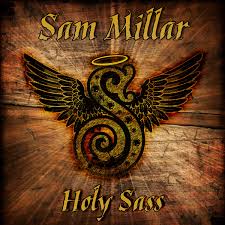 Every now and then you see a band that chimes with you and for an inexplicable reason you just go “Wow”. Bigfoot were that band for me. They had this long haired guitarist with a smiling, cheeky, “I’m bloody good btw” attitude. That’ll be the bold Sam Millar.

I saw them supporting Jeff Scott Soto in Newcastle where I personally thought they were better than the main act. I also treated my wife to a gig in Edinburgh when the lads were supporting Tyketto. I loved the short set, my wife discovered that premium seats at the front side of the stage meant she was under the speakers. She’s not spoken to me since as she’s now partially deaf. She wasn’t a fan however I was.

I then saw the lads at Rockingham where they were awesome and the Welsh mafia agreed with me to the extent that 4 of us were decked out in the green and white Bigfoot Union Jack tour shirts. I think fan-boy is a harsh but fair comment as I collected t-shirts and signed EPs. I also had the pleasure to chat to the lads and so I was gutted when they undertook a farewell tour that, to be honest only Black Sabbath and Kiss have done for longer. The upside of this was Sam Millar (him of the cheeky smile, never say no to a beer and general happy demeanour) announced on Facebook that he was recording his own stuff. I’d seen his YouTube videos (videos? FFS how old do I sound?!) and was committed to a signed copy of the EP.

'Holy Sass' – nae idea what it means but I knew the word on the street was it wasn’t a Bigfoot style sound. This worried me not a jot and into the car CD it went. To be honest it hasn’t been off. It is 5 tracks of pure soft/melodic rock/pop. Delete as appropriate.

'Eyes' kicks things off with a good old fashioned 70’s guitar riff and then I discovered Mr Millar can bloody sing. Not a booming voice but one that totally compliments the sound of the song superbly. It’s foot tappingly good with echoing clapping and nicely layered vocals. There’s also the lyrics, not twee but heartfelt: “So much for walking away, so much for making it history, get up and get up and go if you don’t like what you see”. I think there may be a bit of hangover from a previous relationship there (band or girlfriend I won’t presume to know but you make your own minds up)

'Cyber Girl' – FFS I thought the start was gonna be Mud “Lonely this Christmas” followed by The Darkness and their bloody Christmas song.  However, I was wrong! It grows and grows into a very soft but haunting song. It becomes a superb melodic piece and the Sam solo is stunning. OK it’s still a Christmas style song but it’s more addictive than Marmite. I love it. “Cyber girl meet me in the real world”, a sad refection on youngsters nowadays, what happened to bumping into your wife in a pub? Oh that’ll be just me then.

'Let Me Yet' – the first song I’d heard as sneak preview, the guitar hook and general happy upbeat sound is wonderful. The chorus is superb and it leaves a smile on your face. Again the lyrics are quality but the guitar again is just so good. I think this boy may actually be able to play…….

'Lost in Translation' - nice acoustic start with “that” guitar sound kicking in. A bona fide melodic rock piece that just grows to highlight that Sam is a proper guitarist. It has the orchestral bit at the end which I think was wasted a bit, another minute of that with the guitar and we’d have a perfect song.

'Strangers' - I always thought I’d heard the perfect melodic rock songs and this beauty bursts into life. It’s one of the most stunning piece of catchy guitar based joy you can imagine. My wife sat in the car stunned and said “no way was he in that noisy band, it’s brilliant.” It’s stunningly good, the chorus is an ear worm, it’s one of the most uplifting tracks I’ve heard…..in days

So 'Holy Sass' is just a piece of pure fun, enjoyment and choruses that are just magnificent and if you don’t listen to this and smile you must be dead from the neck up and nothing working downstairs.

I wanted to like it because I’ve met Sam and he is a genuine nice guy but it blew me away how good it was and rumours there may a follow-up coming makes me very happy.

Its the best EP I’ve heard in a long time.