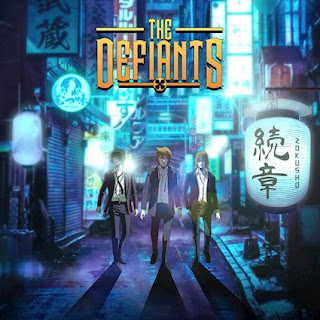 THE DEFIANTS is a band put together by Paul Laine, Bruno Ravel, and Rob Marcello. Fans in the know will immediately recognize them, as all have ties to Danger Danger.

Best known for being the D2 vocalist on four studio albums over the course of 12 years, Paul Laine came back to work with his former bandmates Bruno Ravel and Rob Marcello, who are the other two pillars of The DEFIANTS, for the band’s self-titled debut album in 2015. The guys reunited at the suggestion of Frontiers’ President, Serafino Perugino, who really wanted these current and former Danger Danger members to offer fans of that band some new music. The resulting album was pleasing not only to the D2 fans, but also to ALL the fans out there who are into the classic sound of the era from which D2 emerged.

The Defiants debut album was greeted with a great acclaim as a glorious return to the “in your face” melodic hard rock that enraptured millions of fans back in the ‘80s and ‘90s and is currently enjoying a renaissance here in the 21st century, so a follow-up album was a no-brainer. The brand new album, “Zokusho”, a Japanese word meaning “the sequel” or “the next chapter”, is now set for release this fall.

This time, things for D2 fans get even more exciting as D2 drummer Steve West is a special guest on drums. The Defiants could very well be one Perugino’s best ideas yet. Despite 12 years and 4 albums fronting Danger Danger, 90% of fans would likely go for the Ted Poley fronted version over this Paul Laine period. Paul Laine fronted the band during the AOR wilderness years (’93-’04) unfortunately. Even 80s household names struggled in the advent of flannel, two chords and depressing lyrics (aka Grunge)! Paul proved on the debut that he is definitely the man for this job.

So do the guys shake off the sophomore second album syndrome? More of that later. ‘Love Is The Killer’ immediately sets its stall as a companion piece for the debut. Melodic rock in a modern being. Big (hair), big hook, bigger chorus and some stellar soloing from Marcello. ‘Standing On The Edge’ is a powerful song with TNT in its veins, and some vocal histrionics from Laine. ‘Hollywood In Headlights’ and ‘Fallin’ For You’ are both classic D2 songs by any other name. Both are bona fide Summer driving song to be played at max volume. By now you (the listener) can relax. The boys have got your back. You know its gonna be good from here on in.  ‘Hold On Tonite’ is the first traditional ballad and and takes the pace down slightly, but it’s still good listening, and a definite grower.

‘Allnighter’ is back to a rough and ready approach, with its harder edged guitar riff and a verst that’s straight out of Nickleback’s ‘Burn It To The Ground’ playbook. ‘U X’D My Heart’ is a vehicle to prove how good a singer Paul Laine is. This song is all about him. As he nearly his notes that only dogs can hear.  It has a great outdo from Marcello. ‘It Goes Fast’ just skips along at an enjoyable pace that goes so quick you want to savour it all again. As we get to ’Stay’ Im beginning to wonder how many of these songs are worthy of being singles. It’s hard to select any losers in the pack. ‘Alive’ has a big scoop of U2 in it and I hate myself for knowing this! So let’s leave it at that. Im going to scrub myself in bleach….

…I'm back now for the final song, the Paul Laine mantra ‘Drink Up’. I’ve only seen him once, and he drank, like, a lot! It's a proper old school rocker that invites you to play it loud and proud and it makes no apology for what it is.