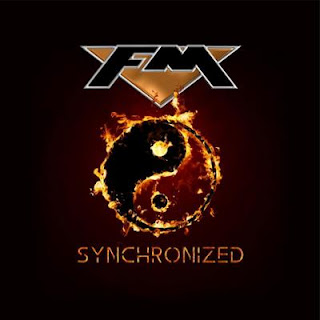 In what currently seems like a pre-cursor to an impeding real-life zombie apocalypse where a strain jumps from animals to humans and mutates to kill 98% of the worlds pollution, its a bloody good job I can rely on certain things to comfort me - such as a new release from my all time faves, FM!

Its been a good 12-13 years since they returned for a headline gig at 2007s Firefest, and after the second-life release of ‘Metropolis’ in 2010 its been steady ahead and a consistent team for those onboard HMS FM. In fact, the output has been more prolific than it was and they are probably more in control of their destiny that at an other point since 1984, and has seen them grace stages they probably never thought was possible (Donington, Sweden Rock, and a long awaited debut in the US), and tours with luminaries such as Foreigner,  Heart and Lizzy. Its a good time to be a fan!


For FM Part II, ‘Synchronized’ is this lines ups seventh studio release, their twelfth in total. It’s some going. If you’re a fan already then there’s a lot to like. ‘Synchronized’ is rightly the first song to be picked as a single, as its in the same vein as a ‘Blood and Gasoline’, ‘Tough Love’, ‘Tough it Out’ and fires along at a strong pace, led by Kirkpartick’s guitar and Davis’ keyboard. All of which is enveloped in Overlands vocals and the ‘gang of fives’ harmonies. It’s a cert for addition for the live shows. ‘Superstar’ is almost a departure for FM, its a mellow, pop-fuelled number that is certain of coverage on Radio 2 I suspect. I found it a bit too bland at first, but after a few spins it’s a definite grower, and more ‘one for the ladies’? I can already visage the video - filmed in Arizona (Blackpool) with a sweeping shot, (drone, not helicopter), followed by a top down Jag racing across Route 66 (A6). ‘Best Of Times’ follows on from ‘Superstar,’ and has a bit more vim and vigour, and without Overland singing his arse off, it would be average in any other hands. ‘Ghosts Of You And I’ is the first ballad, and its still very un-FM like. It’s not a bad thing, Im just taken a bit aback by the first few numbers being a shift from the norm. ‘Broken’ is upbeat and akin to what hit the Billboard charts mid-80s, and is ear candy of the highest order.


‘Change For The Better’ is a classy number and definitely channels Don Henley’s ‘Boys Of Summer’. ‘End Of Days’ goes for a ‘BIG’ sound from the off, with a nice ‘choppy’ guitar sound running through the whole song. ‘Pray’ sees Overland channeling his inner Sam Cooke and has all the hallmarks of a soulful/Blues STAX record from the 60s with a modern twist. It’s only missing a horns section and Steve ‘The Colonel’ Cropper, and it is a firm favourite for me. I.Loved. It. ‘Walk Through The Fire’ is bound to bring comparisons to Mr. Misters ‘Broken Wings’ thanks to Jem Davis’ ivory tinkling. It’s as 80s as a pair of Coverdale’s leg warmers and its all about the bridge and chorus, thus proving that the second half of ‘Synchronized’ is definitely on a roll.

‘Hell Or High Water’ is one of the heavier songs (in FMs world), it is built around the infectious chorus. ‘Angels Cried’ has a slide opening riff before settling into a bluesy, almost gospel ballad, with a side of Bon Jovi thrown in. Only, when BJ was good! Finally we are on to ‘Ready For Me’ is like FM of old, when every album or single had a B side like a Bad Company cover or BC inspired dong, and RFM is no exception and it finished the album on a positive.


Basically I take away my comment at the top of this review. Yes its a comfort for a new FM album, but it’s very different to anything they have put out before. That has thrown me a bit, which is both good, and also slightly puzzling to me. That in itself I think is a good thing, and that deserves a round of applause. It’s definitely a stronger period for me in the second half, as a few of the first half made me question if there was a pattern or new sound they were going after. It’s almost akin to when I heard SO for the first time. However, I’m positive that after many more listens, it will be a big hit with me. One thing is certain, Steve Overland never sounded so good.

No doubt Dave Ling will wank himself into a frenzy.

Tracklisting
Synchronised
Superstar
Best Of Times
Ghosts Of You And I
Broken
Change For The Better
End Of Days
Pray
Walk Through The Fire
Hell Or High Water
Angels Cried
Ready For Me
on May 01, 2020