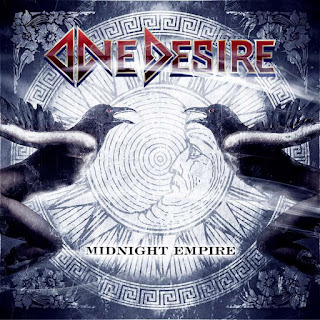 I was first aware of One Desire a few years ago and was lucky enough to see them in The Cathouse in Glasgow supporting Eclipse. Word was they were decent and the first album imaginatively called One Desire was superb, I loved it and loved them playing live.

A couple of things struck me, they were called One Desire just as some band called One Direction were still making it big in the world. Luckily they were nothing like One Direction. The second thing was that lead singer André Linman could not only sing well but had hair that a shampoo advert would die for.

Their 30 minute set was superb, tight and I was left well impressed. Sadly I missed out when a few mates went to see them in Finland, I’d have loved to see these lads on home soil.

And so I was lucky enough to get a link to the new album Midnight Empire. Actually lucky doesn’t cover it, I was blessed!
Shadowman – starts with a haunting recorded intro with crackles from the record it’s taken from before the music kicks in and it kicks in with style. A thumping driving beat, the vocals clear and the backing vocals full of menace as it builds to a great chorus. It’s full of energy, keyboards and atmosphere, it sets a standard. “The Shadow in the window hiding”…..

After You’re Gone – what a tune, it’s catchier than a pandemic (too soon?), it just drags you along with a massive smile on your face. Simply WOW! One Desire for me was this track not to end (see what I did there……). It’s definitely nods towards Eclipse which can never be bad thing in my opinion, totally love it, no wonder it was released to highlight the album.

Down and Dirty – completes a hat trick of 3 catchy melodic tracks of real style. Rather than Down and Dirty it’s more “Upbeat and Clean”. It’s got another great chorus and layered backing vocals that just simply work.

The vocals of André Linman complement the solos of Jimmy Westerlund superbly. The talent of both for me matches if not exceeds the original CD. I say CD because I’m old and still love a CD mainly to blast out in the car.

Through the Fire – acoustic guitar start, vocals exposed and wonderfully haunting. What a beautiful slow burner this is. It grows into a magnificent atmospheric track, One Desire certainly aren’t a one trick pony. This takes them to another level. There’s a touch of Rush, a bit of Eclipse and the guitar solo at the end could only sound more magnificent if backed by an orchestra and choir. Sublime.

Heroes – another gentle build up that bursts into life. It fits in with the previous songs seamlessly. Again the musicianship is top.

Rio – a cracking ballad, the piano intro sets the tone, the vocals of André lead into a slow builder, by slow I don’t mean bad, they just let the song build and let the guitar solo take over in a note perfect way until Andre’s vocals end it beautifully.

Battlefield of Love – the way OD use an acoustic guitar to lead into a full-on electric high tempo piece makes their sound well, well just their own. A clever use of keyboards (which are across a lot of the tracks) just adds to the feel.

Killer Queen – another superb full on piece of Scandinavian rock – it zips, it’s not Queen but it’s still a royal song. Sorry, I’ll get my coat.


Only When I Breathe – the rain fall backdrop leads to a classic finish to what is a bloody decent album. Again it starts showcasing the vocals of Andre on top of a gentle guitar. A superb ballad again and the vocals are stunningly good. “Now it only hurts when I breathe”.

If you love melodic rock and especially with the Scandinavian feel then you won’t be disappointed, it’s a belter and the best I’ve had the pleasure to hear this year. I’ve not mentioned Ossi Sivula on drums and Jonas Kuhlberg on bass guitar but they are just as important to the sound because they just do their bit, no frills but 100% behind the whole sound. Also the use of keyboards just works perfectly.

In conclusion Midnight Empire is a little gem, the band deserve a much bigger audience. They were superb live and I can’t wait to see these songs with a large appreciative audience. Totally loved it with so many earworms in the CD. The faster stuff is immense but for me “Through The Fire” just hits every button although my favourite will always be After You’re Gone, up there with the best of Eclipse, HEAT and Perfect Plan, it is simply that good.

I would say check the band out live on their European tour with The Night Flight Orchestra in March 2020 but that won’t happen, instead buy this, dream and wait until they play Scotland, I’ll see you there, I’ll be big idiot with a smile on my face. They won’t disappoint.

Room Experience - 'Another Time And Place' 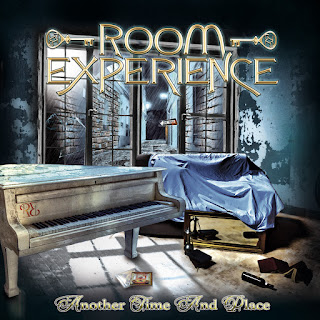