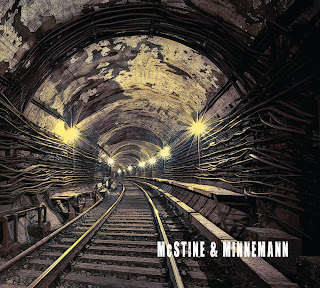 McStine & Minnemann is a new band consisting of Randy McStine (Lo-Fi Resistance) and Marco Minnemann (The Aristocrats). Pre-orders for their debut album began on Friday May 1st, along with the release of their first single “Program” and its brand new music video. See further below.

The duo initially met in 2018 while working with other artists, but as they discovered their shared passion for an assortment of Rock, Pop, and Punk artists, they decided to embark on a collaborative project together. Although McStine and Minnemann initially set out to record an EP, they quickly shifted to making an album as their musical ideas and chemistry flourished.

Im a (sort of) fan of both people here. I first came to notice Minnemenn when he auditioned for the vacant Dream Theater position - I thought his was the best audition; and I love the Lo-Fi Resistance album ‘A Deep Breath’ (I know that there are more. ADB is my favourite of them). I never thought a collaboration of the two would be on the cards, as I think Minnemann is more of a technical drummer and think of him more of a proggy kind of member in bands like The Mute Gods, The Sea Within, and Levin Minnemann Rudess. And his splendid work with one of my all-time favourite artistes, Steven Wilson.

Let just say that both of these guys have a bit of form, therefore I suppose it shouldn’t be much of a surprise that they got together, should it, Paul?

If ‘all over the place’ is a musical style, then opener ‘Program” falls into this style, in a good ‘all over the place’ kind of way. It chops and changes from rhythmic drumming, clanging guitar work, and overlaid with McStines vocals, ranging from prog to pop in a matter of a single line. Its part Queen, Rush, ELO and everything in-between. They certainly won’t get pigeon-holed, that’s for certain. ‘Falling From Grace’ kicks off with a drill, clanging, and a pulsating bass and guitar riff, with some eclectic, and choppy vocal phrasing. It's the kind of song people won’t be having as a first dance at a wedding, put it that way. Its a strange listen at first, but it definitely plants seeds as there’s a hell of a lot to take in with just a single listen. I'm sure at one point, someone is playing a 1960s boiled egg slicer! ‘Your Offenses’ (thankfully) gives my mind and ears a rest, and it is more of a ‘standard’ song, if that description applies to McStine & Minneman. It’s a very prog/pop song with some cracking drumming and guitar work. ‘Catrina’ gets us back on the ‘eclectic’ road. It’s definitely a challenging listen so far, but there’s enough going on to make me think ‘WTF?’, and I really like the tone of McStines vocals. ‘Top Of The Bucket’ again is more of a ‘sensible’ offering from Marco and randy, as in it is not that mental. ‘Tear The Walls Down’ is traditional, as in its Pantera jamming with Rush, but with Dream Theater's singer (it isn’t by the way, it just sounds like LaBrie). It is my second favourite of the album so far after ‘Your Offenses’ (I’m offended by the non English spelling of ‘offences’).

‘Fly’ pulsates along on a grabbing base and synthesiser and is definitely an ear worm in the making. ‘Activate’ is another song that makes the album worthwhile for my more melodic sensibilities. ‘The Closer’ starts like a ballad, piano and layered vocals. I’m expecting a change in tempo, and the change is…..nothing, just a piano, lap steel guitar and vocals. Its rather nice. Quickly we are onto the final track ‘Voyager’, a darker song that only Minnemann and McStine can meld dark and dirty riffing with Beatles/ELO style harmonies! This typifies the album in one song.

If you remember that period that Tom and Jerry’s studio did when they tried to save money and went to Gene Deitch in the Czech Republic in 1961/62? Well the music is like that. Its two blokes with a love of time changes, ambient sounds, progressive boundary pushing, with some pop/pock melody interspersed with some great (and strange) playing! And a bit of noise thrown in for good measure.I am sure they will think different to me (a heathen).

The songs are all quite short which is something I found appealing, because if they were in the ‘prog’ mould of being 10-15mins long, I think I’d have given up the ghost long ago. I think that if you love the outer reaches of prog then you will love this. Or if you’re off your tits (or anywhere in-between the two come to think of it). I have to admit that I found it challenging, but Ive still ordered it, if that makes any sense.

OK, all those bands that brought me here - Lo-Fi, The Sea Within, Steven Wilson, The Mute Gods, well…most of it is nothing like any of that. But….for ‘Your Offenses’, ‘Program’, ‘Activate’, ‘Tear The Walls Down’, ‘The Closer’ and ‘Voyager’ alone are worth the 7.5 score. The rest I am hoping will grow on me.