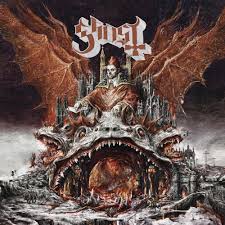 Fans have come along for the ride for years, not knowing for certain who was behind the anonymous band… that is, until Tobias Forge recently revealed himself as the man behind Ghost. Each album is more like a film release than a record release. In addition to serving as director, Forge conceives the role of every character, and oversees everything from the screenplay to video to wardrobe design to artwork to cinematography to soundtrack.

For a brief Ghost 101 – Papa Emeritus I was singer on the first album. Papa II on Infintessimum, and Papa III on Meliora. Papa Emeritus Nil or Zero is the father of Papa’s II and III. II & III are brothers born three months apart! Papa Nil is considered too old for fronting Ghost, so in comes Cardinal Copia, who is an apprentice who needs to learn from the master, with a view to becoming Papa Emeritus IV and is vocalist for Prequelle. Phew. Get it? Got it. Good. Then youre one step ahead of me.

Lyrically, Prequelle delves into the plague, the apocalypse, and dark ages.

Now, back at the beginning I thought that Ghost were a gimmick band (Think Kiss, only in robes). I dismissed them at my peril. I would have closed the curtains had they been playing in my back yard (etc,.). Until last year…

I caught them on tour and was completely blown away, buying all the albums within days, and fully emersing myself in the history and unbelievable riffs, coupled with melodies to literally die for.

On to 'Prequelle', and just like old school, we get an intro based on the plague, with “Ashes’, or as we Brits call it, ‘Ring a ring 'o roses’, before expanding into what becomes the unbelievably sing-a-long-a-tastic ‘Rats’. If anyone can make a poetic and infectious song about vermin, its Ghost. In fact, I cant tell the difference between Papa II and Copia. 'Rats' is based on 80s hair metal riffs, with the melody of J-pop! ‘Faith’ is old-metal neo classical riffage, with their trade mark chugging riff overlaid,  and is the heaviest song on the album with some great harmonies – propably the only song that references their past. It ends with a choral passage leading into ‘See The Light’ and is gonna be a big hit for Ghost. The verse and chorus are like 'light and dark', with a delicate piano, and powerful darkness of the chorus.

‘Miasma’ is a bit of a strange beast in todays World, an instrumental from a bygone age of the 70s and 80s when albums used to be full of the buggers. I always thought it was a lazy option, but in this instance, guitars, retro keyboard synth and even a saxaphone all come to play their part. ‘Dance Macabre’ is an old school rocker that would have blitzed the Billboard charts back in the day and is different to anything that Ghost have previously given us, its something like Abba could have written, and is absolutely massive. ‘Pro Memoria’ starts as if it were a soundtrack piece, or written for a musical not to dissimilar from Jeff Wayne, and is like a old 70s prog song full of storytelling. Different, but in a great way. ‘Witch Image’s’ opening riff is just like klassik Kiss, and is catchy as Hell, with the keyboard and guitar riff interplaying with the melodic verse and chorus to great effect.

When you think one instrumental is one too many, then we get a second one. ‘Helvetesfonster’ is part X-Files intro, part Jethro Tull, and Ayreon, which is folky, earthy and just feels as if there's lyrics itching to reveal themselves, and for a 51 year old, brought up on shit like like this, is manna from Heaven. Its quickly onto the final song, ‘Life Eternal’ a more melancholic song for them proves to be a fitting end to this strange, different and beautiful album.

All the old elements are they from Ghosts past, but I think that this is an album that could get them even wider appeal as the songs of offer could, and should cross borders and open them up to a whole new audience. Its rock, metal, pop, prog, soundtrack and Broadway/West End musical running all they way through this album.

Ghost  have announced their fourth sacred psalm Prequelle (pronounced prē-KWELL) will be released on June 1, 2018 via Spinefarm/Loma Vista Recordings. Prequelle is available for pre-order. Limited edition bundles including 8-Tracks, Casettes and more are available exclusively in the Ghost shop https://uklomavistarecordings.ochre.store/ghost