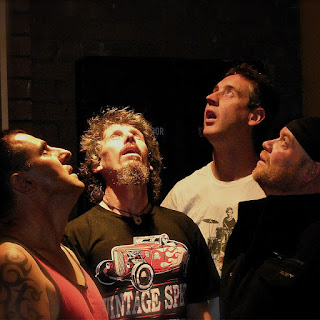 Introducing Hi Speed Life. These guys are a huge hit in their hometown of Adelaide, Australia and are currently preparing to release their next release later in the year working with local producer extraordinaire Darren Mullan of Adelaide Recording Studio’s, the man behind the mighty Jac Dalton sound amongst others.
Peter Eime on base, Paul Kennedy on lead guitar, Dom Furina on drums and Danny Gates on vocals, make up Adelaide band Hi Speed Life. Hi Speed Life take pride in producing an original sound of rock.

Listening this new Australian group, it’s clear these recordings are demo versions but they give you enough indication as to what to expect if these guys eventually release an official album.

On first listening, I’m not 100% impressed. ‘Every Day’ & ‘Fake It’ pass by without any attempt at pricking my ears up that are waiting for that thundering chorus to kick in. These tunes just roll by unnoticed as nothing seems to really happen in them.

‘If You Wanna Fight’ is no different but then things change when ‘Rocket Man’ kicks in. This is very brit-rock style stuff and a breath of fresh air compared to what I’ve heard so far, with it’s The Kinks  ‘You Really Go Me’ style riff.

‘Take Me Down’, although holds some nice riffs in the verses, just doesn’t pack a punch when it comes to the chorus, but does kick into a great solo, which, for me, saves the song. The whole EP, taking into account that this is a demo version doesn’t sit right with me. This band does not in my opinion deserve a recording contract. It’s basic rock n roll. Nothing magical, different, or catchy enough to allow your ears to part company with whatever they are doing at the time and start listening to what’s in front of them.

And then ‘Rangatang’ kicks in. It starts with a lovely bass riff, which is then picked up by the guitars and slides into the verse. This is more like it. It has a hint of Smashing Pumpkins to it and is by far the best song on the EP so far. My ears have finally pricked up!!

‘Breathe Now’ is another good effort and it’s riff reminds me of Ross The Boss ‘By Blood Sworn’. ‘Make It Right’ is another great tune. Seems these guys have saved the best tunes to the 2nd half of the EP!! We conclude with ‘Same Old Thing’ which has lots of similarities to their fellow countrymen AC/DC, but on a lower scale, but not a bad rock n roll tune.

Overall, I’m not sure these guys would be a hit over these shores. They would need to come up with more tunes like ‘Rangatang’ and ‘Breathe Now’ in order to win our hearts.